Equipment Phono Cartridges
Price Now $12,995.00
Was
Was
Save $0.00 (0%)
Questions and Answers
Availability: In Stock
This item is in stock and ready to ship. Depending on the time of day when you place your order, it will ship same day or next business day. 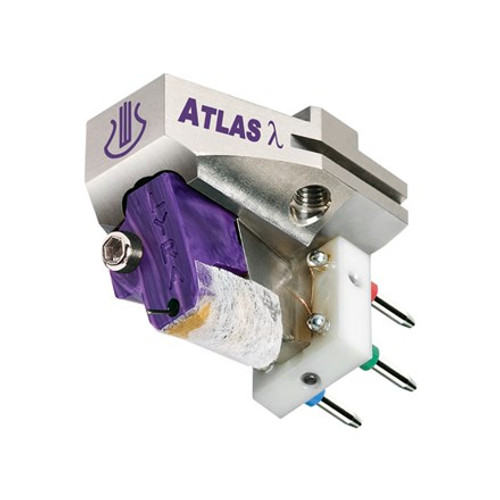 With the Lyra Atlas SL Lamda MC phono cartridge, distinguished from its sibling by way of a single-layer winding for increased detail and resolution, you're not just listening to records. You're sharing in the artists' visions and experiences. By literally misplacing the "barriers" to great sound present in all cartridges, the state-of-the-art Atlas SL Lamda achieves a number of important sonic benefits. Different-shaped structures on the left and right sides of the body suppress the formation of standing waves within, resulting in a significant reduction of resonance-induced colorations. Music comes through Atlas SL Lambda with wondrous purity and a determined sense of purpose that will leave you breathless.

Individually tuned for optimal uniformity and inspected multiple times to ensure perfection, this remarkably innovative, Japanese-made, asymmetric moving-coil design is the culmination of Lyra chief engineer Jonathan Carr's quest to refine the company's approach to cartridge suspension and damper systems. By optimizing Atlas' costly materials and construction to better match its diamond-coated boron rod boron cantilever, Atlas SL Lambda delivers musical information with ravishing speed and transparency. You'll feel transported to the original recorded event when you hear how this cutting-edge tracker mines the grooves of your favorite albums and presents the heart and soul of each LP.

So, what's the story behind the big leap forward? Being utter perfectionists, Carr and Lyra master cartridge builder Yoshinori Mishima were never entirely satisfied with how the pickups handled the never-ending stream of vibrational energy that plagues all cartridge assemblies. Extensive listening sessions and scientific analysis revealed the screws and voids in earlier designs became a source of internal reflections and provoked sympathetic resonances due the remaining vibrational energy. Carr then spent years striving to circumvent such vestigial vibrations. Amazingly, Atlas SL Lambda completely banishes them.

By separating the tapered dampers of Lyra's innovative New Angle design into flat elastomers, Atlas SL Lambda halts vibrations and prevents them from reaching the rest of your system. An ingenious support "pillow" was also created to serve as the cantilever preloading element. Suffice it to say, this is a moving-coil cartridge like no other. Let Atlas SL Lambda's incredible speed, stunning detail, and authoritative stability show you just how close to the recorded event your favorite records can bring you.

"The Lyra Atlas transmitted and released energy with alarming speed, leaving no residue to rattle around, repeat, cloud, or confuse the next musical instant. Images just 'popped' in space. Bass, taut and nimble, dug all the way down. The Atlas's overall sound was positively effortless."
– Michael Fremer, Stereophile, Class A Recommended Component

"This is a stunning achievement, an explosively dynamic cartridge that boasts rock-solid imaging and a smooth treble. It also plumbs the nether regions with tremendous accuracy. The Atlas has game...not a cartridge that will leave you shrugging your shoulders, but, rather, gaping in amazement."
– The Absolute Sound, Golden Ear and Editors' Choice Awards

Enhanced Resolution, Deeper Details: Differences Between Atlas Lambda and Atlas SL Lambda
Atlas SL Lambda is a super-low output (0.2mV) version of Atlas featuring a single-layer winding that reduces by half the moving mass, netting increased detail and enhanced resolution. Due to the reduced output, Atlas SL Lambda requires a high-gain phono preamplifier capable of 64dB of gain or a step-up transformer designed for cartridges of 2-3 ohms or less. While Atlas SL Lambda is definitely not for all users, those with the proper components will experience the added benefits of extra purity, more pristine tones, and deeper details.

Optimal Performance: "New Angle" Technology and Seamless Cantilever Connection
Atlas SL Lambda uses Lyra's "New Angle" technology, which mechanically pre-biases the signal coils so that they are perfectly aligned to the front and rear magnets during LP playback. The approach equalizes out discrepancies in vertical and horizontal compliance, and enables Atlas Lambda's coils to move with equal ease in all directions for optimal performance. Lyra also remains the only cartridge manufacturer to mount the cantilever assembly directly into the cartridge body, thereby achieving a totally seamless, rigid connection between the cantilever assembly and head shell. Its effectiveness has been further enhanced as a result of the asymmetrical structure. Control over spurious resonance is also aided by the use of a narrowed mounting area, which couples Atlas Lambda more tightly to the head shell and facilitates the transfer of vibrational energy into the tonearm.

Incredible Rigidity, Authoritative Tracking, Ultra-Low Distortion, Sublime Efficiency
While Atlas SL Lambda retains the yoke-less dual-magnet system, diamond-coated boron rod cantilever, and variable-radius line-contact stylus of the Lyra Titan, the rigidity of the double knife-edge cantilever assembly mounting structure is increased and the signal coil system completely new. Rather than a square, the coil former takes the shape of an X, which allows each channel to operate with greater independence from the other. The result: Better tracking, tighter channel matching, improved separation, and lower distortion due to crosstalk. At the same time, Lyra increased both the performance and efficiency of the generator coils. This reduction in mass further improves tracking performance, while the enhanced output and electrical characteristics allow phono preamplifiers to perform more efficiently.

Contact and Non-Contact Machining Further Lessen Resonances
Atlas SL Lambda uses a body meticulously carved from a solid billet of titanium via a process that involves both contact (for the exterior) and non-contact machining (for the interior body structures). By making most of Atlas SL Lambda's body surfaces non-parallel (avoiding dimensions that are multiples of other dimensions), and adding a pre-stressed phase-interference resonance-controlling system, resonances are further inhibited.