Equipment Phono Preamps
Price Now $2,000.00
Was
Was
Save $0.00 (0%)
This product is not eligible for further discounts.
Questions and Answers
Availability: In Stock
This item is in stock and ready to ship. Depending on the time of day when you place your order, it will ship same day or next business day. 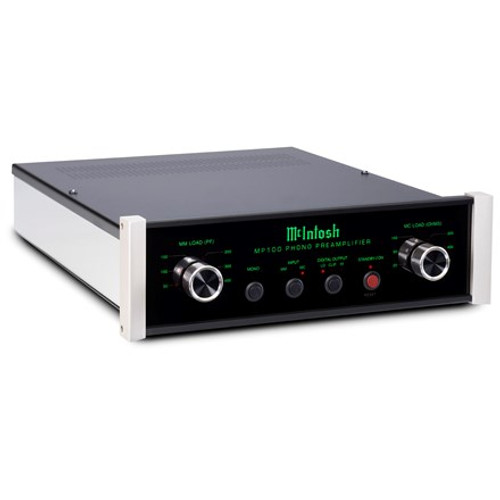 The MP100 MM/MC phono preamplifier is the first dedicated phonostage in McIntosh's revered history. For most manufacturers, such a designation doesn't matter much. But when you're McIntosh and boast one of the most storied histories in the audio industry, MP100 represents a significant milestone. Why, after seven decades, has McIntosh now created a standalone analog component that features everything new and older vinyl enthusiasts could possibly want from a phono preamplifier? Simple: Need and demand for excellent vinyl playback. Featuring adjustable, loading moving-coil and moving-magnet inputs with six settings for each, plus balanced and unbalanced analog outputs, the made-in-the-U.S.A. MP100 is fully geared to produce high-end sound distinguished by the immersive warmth, subtle details, emotional immediacy, and vast spaciousness for which LPs are prized. The transparent, painstakingly accurate device also includes a Mono switch that optimizes the experience of mono LPs by reducing noise and reproducing the signal correctly.

But the compact three-inch-tall, 11.5-inch-wide MP100 goes even further. Equipped with optical, coax, and USB digital outputs, as well as an internal A2D converter that encodes PCM, this stellar phonostage allows you to rip your LPs to a computer and produce high-quality 24-bit/96Hz archival files. Plus, if a particular LP has an extremely loud passage, a clipping indicator alerts you so to lower the digital output to get a distortion-free recording. Inside, a multi-regulated power supply, noise-free electromagnetic input switching, and precision phono preamp circuits all ensure tremendous sonic performance. And it goes without saying that, externally as well as internally, MP100 boasts McIntosh's peerless hand-crafted build via a signature glass black faceplate, LED front-panel illumination, and stainless-steel chassis. Equally at home as a way to add turntable capabilities to an existing preamplifier or as the anchor of a new stereo setup, MC100 is legendary McIntosh quality through and through. A dedicated McIntosh phono preamplifier may have been seven decades in the offing, but the wait was worth it. 100% Music Direct Guaranteed.

"This is a clean-sounding, detailed, commanding phono amp that also represents excellent value. It’s compact, beautifully-made in the McIntosh manner and easy to use. Once the features are accounted for, especially XLR balanced out, you realize that it’s actually something of a bargain."
—Ken Kessler, Hi-Fi News, Highly Commended review

"The MP100 combines exceptional (for the price) transparency and transient precision. It is clean, clean, clean and of course quiet times three as well... it excels at delivering the goods at very low SPLs where some at this price point just pack up and go home… a product built and presented to [McIntosh's] legendary standard."
—Michael Fremer, Analog Planet

Hand-Made for Everyone That Appreciates the Superiority of Hands-On Artistry
McIntosh's hand-crafted ethic predates by more than half a century the hand-crafted movement currently re-defining the beer, food, furniture, jewelry, and soap industries. From patrons of farm-to-table restaurants to fans of limited-batch beer, people increasingly realize the importance and superiority of hand-crafted goods in their everyday life. Whether it's the exacting detail afforded the PC boards, the meticulous attention paid to the hand-wound transformer coils, or the innovation behind patented Power Guard circuitry, McIntosh shares in the same belief. Rather than cut corners or adhere to mass-produced construction, McIntosh only puts its name on components that deliver paragon experiences by way of their unassailable artistry and precision-minded quality. While McIntosh products don't come cheap, they stand out – and stand the test of time – in a world flooded by homogeneity and inferiority.