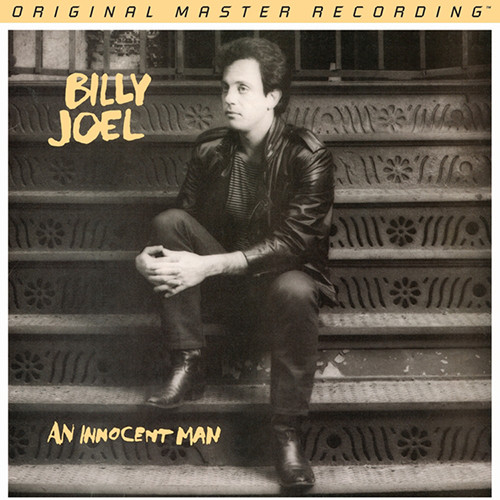 Infectious Doo-Wop, Carefree Soul, and Harmonious Pop Are a Tribute to the Music of Billy Joel’s Childhood: An Innocent Man Includes “Uptown Girl,” “For the Longest Time,” and “Tell Her About It”

After making The Nylon Curtain, Billy Joel felt the need to exhale and get back to the carefree music of his childhood. He also met supermodel Christie Brinkley, who brought serious degrees of levity and romance to his world. In love, relaxed, and out to have fun, the singer crafted An Innocent Man, arguably the most easygoing and pleasing album of his career. Featuring four Top 40 pop singles and the same number of Top 5 Adult Contemporary hits to grace the Billboard charts, the record remains a commercial staple.

Mastered from the original master tapes, Mobile Fidelity's numbered-edition hybrid SACD plays with vibrant sonics that match the contagious spirit of the music. The effervescent harmonies possess an airiness and extension that lends to realistic tonal decay. Instruments are balanced and placed on a wide, deep soundstage, contributing improved to improved imaging and spaciousness. Joel’s voice, too, comes across with tremendous clarity, presence, and body.

As usual, Joel proves a melodic jukebox. The vocalist’s grasp on structure, hooks, and delivery help make this batch of songs among his most beloved, easy to hum, and impossible to ignore. Much of the appeal resides in Joel’s understanding of the early rock and roll, doo-wop, and soul that he grew up hearing in New York, and the manners in which the popular songwriters favored simplicity over complexity, good-natured vibes over seriousness, and romantic charm over introspective sadness.

Whether floating on a cloud on the giddy “Uptown Girl” (check out his falsetto), doubling as both the lead and background vocalist on the reminiscent-themed “The Longest Time,” or tapping gospel undercurrents on the tribute “Keeping the Faith,” Joel revels in 50s and 60s pop constructs, turning out amiable refrains and unforgettable moods. As the calm before stormier periods in his life, and a timeless connection to America’s finest pop music traditions, An Innocent Man is indeed innocent—a guiltless pleasure that keeps on giving.