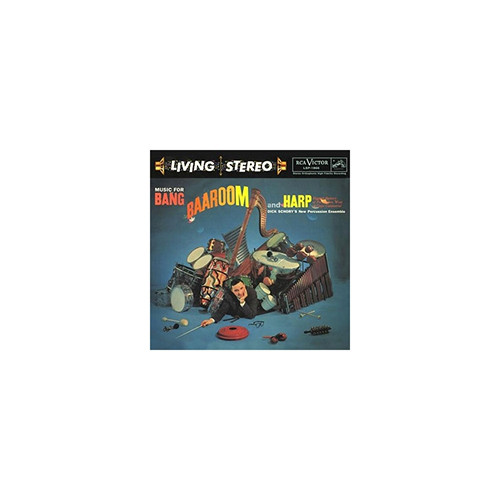 Be alerted when Dick Schory's New Percussion Ensemble - Music For Bang, Baaroom, and Harp (Hybrid Stereo SACD) is back in stock

"Little did any of us who were involved in the planning and recording of Music for Bang, Baaroom and Harp know, back in 1958, what an impact this album would have on the record industry and how it would effect my career," writes Dick Shory, about the audiophile instrumental classic, the first stereophonic recording in the industry to be classified a "Best Seller."
Now, revel in the enhanced clarity and sonic richness of a Hybrid Stereo SACD edition remastered by Ryan Smith at Sterling Sound, giving this classic a fresh, vibrant appeal. The superb remastering from the original 3-track master tapes brings out subtleties of the instruments, arrangements, performance and ambiance of Chicago's Orchestra Hall lacking from the original pressing and subsequent versions.
The concept for this album is simple: Dozens of standard and exotic percussive instruments (re: manifold from a 1946 Chevrolet) were employed in original and standard tunes arranged by Schory, Bobby Christian, Mike Simpson, Willis Charkovsky and Skitch Henderson, who at the time was musical director for NBC's "Tonight Show." Three tracks are of particular note: the quirky "Tiddley Winks" and the exotic "Baia" and "Typee." The jacket, depicting Schory poking out from a pile of instruments, is a classic of LP art.
The recording, utilizing RCA Victor Record's Red Seal Classical Division's equipment - the same used to record the Chicago, Philadelphia and Boston Symphony orchestras at the time - was recorded in Chicago's Orchestra Hall on June 2 and 3, 1958. Two custom Ampex 300-3 half-inch 3-track tape recorders, running at 15 and 30 inches a second, captured the performances by eight percussionists together with other performers from the Chicago Symphony on piano, string bass, guitar, banjo and harp.
Commercial success followed. Not only was the album an audiophile classic, it also became one of the best selling instrumental albums of the late 1950s and early '60s with Billboard, Record World and Cash Box magazines listing it on their charts for more than two years, and in the "Top 10" best sellers for more than six months. The album kicked off an era of percussion recordings that tried to duplicate the success of Music for Bang, Baaroom and Harp, with limited results.
Analogue Productions brings you this remastered and improved edition so that a whole new generation of audiophiles and even casual music lovers can discover for themselves the wizardry, wit and wonder that is Music for Bang, Baaroom and Harp!
Features:
• Hybrid Stereo SACD from Analogue Productions
• Mastered from the original 3-track master tapes by Ryan Smith at Sterling Sound
• Compatible with both CD and SACD players as well as all SACD-compatible DVD players
• Also available on 200g vinyl LP