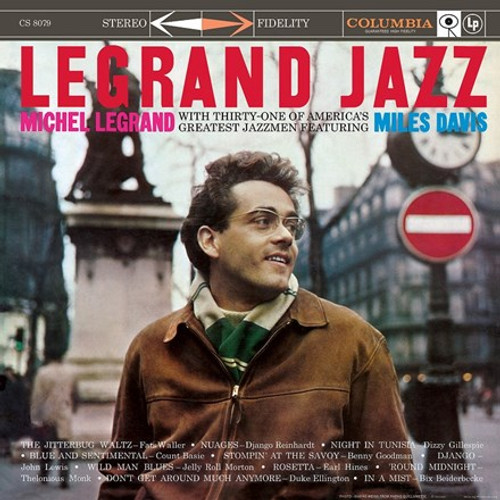 Academy and Grammy Award-winning composer/arranger Michel Legrand (The Umbrellas of Cherbourg, Summer of '42, The Thomas Crown Affair) was not a household name in America in 1958, but he was renowned among musicians and a life-long fanatic of American jazz and its players. Legrand Jazz is the result of Legrand traveling to America and using his Columbia Records contract to enlist label mates (and soon to be legends) Miles Davis, John Coltrane, Bill Evans, Paul Chambers, Ben Webster, Hank Jones, Herbie Mann, Phil Woods, Donald Byrd, Art Farmer, Sheldon Powell, Teo Macero, Milt Hinton, Jimmy Cleveland, and others to record his fantastical reimagining of 11 jazz standards.

Not merely content to lay down another Parisian hard-bop play-along, the 27 year old worked against type and expectations at every turn, creating a moody, idiosyncratic landscape for unusual call-and-response chase solos, washes of harp and vibes, and sultry horn canvases. Davis, Coltrane and the others manage to fall in with the diverse, mellow flow of Legrand's arrangements while keeping their unique musical voices. The large recording space is captured in every detail, while Davis' full force dynamic variations come through with incredible veracity. The gentle ebb-and-flow of Legrand's parts highlight microtonal fluctuations on every track.

You are along for a magic carpet ride of large jazz ensemble recording when you spin this revelatory new Hybrid SACD version from Impex Records.