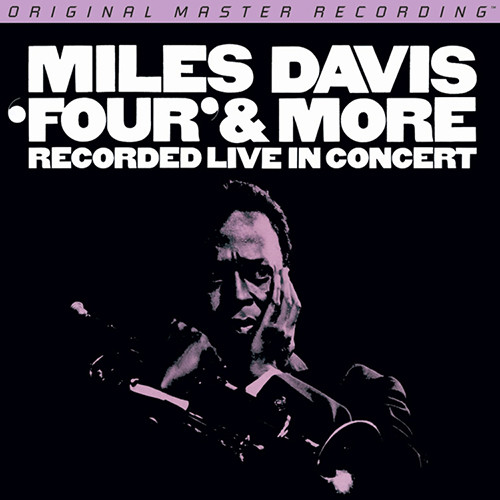 Exhilarating, Uptempo, and Immediate: Four & More Documents One of Miles Davis’ Final Excursions with a Program of Standards

Given his prolific recorded output, Miles Davis seldom abandoned a conceptual vision in the studio, particularly after the turn of the 1960s. Which makes a live document such as Four & More all the more valuable for the manner in which it portrays the legendary trumpeter removed from thematic demands and interior confines, and instead letting loose onstage with a program of stellar material that he’d soon abandon in favor of experimentalism.

Mastered from the original master tapes, Mobile Fidelity's hybrid SACD teems with the urgency demonstrated by Davis and his band—notes flooding the listener with an attack only possible from sound featuring full frequency extension, tremendous separation, and you-are-there immediacy. Those who may be unfamiliar with this title should prepare to be blown away. Aficionados know what to expect on the music front, but Mobile Fidelity’s reissue ratchets up the thrills by several degrees.

Recorded on February 12, 1964 in Philharmonic Hall at New York’s Lincoln Center, Four & More functions as a natural bookend to My Funny Valentine. Whereas the latter spotlights ballads, this thrilling souvenir is all about quick tempos, rushing solos, left-hook rhythms, and hard-bop grooves. Drawing largely on mid- and late-1950s material, Davis—accompanied by bassist Ron Carter, drummer Tony Williams, saxophonist George Coleman, and pianist Herbie Hancock—approaches standards such as “So What,” “Seven Steps to Heaven,” and “Four” with biting tenacity and furious passion. Individual theme race by as the collective barges in to take rapid, punctuation-asserting solos.

Few, if any, live Davis performances match the hurricane-generating intensity and dynamic aggressiveness captured here. One reason for the vigor? Davis waived he and his musicians’ fees for the concert, taking place under the auspices of a political benefit, a decision that angered some of his sidemen. Whatever the cause, Hancock swings, Coleman flexes muscles, Carter bows instructive passages, and the 19-year-old phenom Williams throws down with breathtaking agility. Amidst the melodic tangents and galloping exchanges, the quintet retains gripping control, with eight-bar dialogues and vamps supplying an endless array of cues and endings.