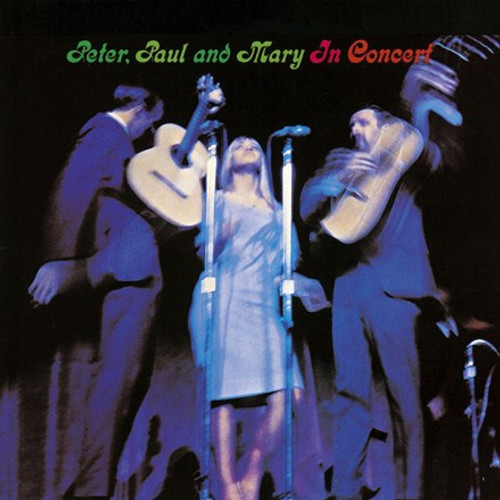 Be alerted when Peter, Paul and Mary - In Concert (Hybrid SACD + CD) is back in stock

*Disc 1 is a hybrid SACD containing the complete album on the SACD layer. Due to the time constraints of the CD format, the performance is split between Discs 1 & 2.

The In Concert set, which was released on July 24 (the second day of the 1964 Newport Folk Festival), gave a good idea of the on-stage abilities of an act that had become a worldwide success. A trade ad for the album noted that, since forming, the trio had played over 400 concerts to more than two million people.
More than half of the 18 selections had not appeared previously on a Peter, Paul and Mary album. And the nearly 82-minute running time allowed space for the whole range of the group's talents, from its mastery of traditional and thoughtful new material to Stookey's previously unrecorded comic sensibility.
"I think that the In Concert album in it's own way had something very, very special," said Peter Yarrow. "There was a sense of really being there at the concert, and there really was a sense of capitulation of the flow of the concert. It had a point of view. It had a consistency in sound terms."
At a time when double-LP sets were practically unheard of, In Concert peaked at #4 in September of 1965, staying on the charts for 54 weeks, and becoming Peter, Paul and Mary's fourth straight gold record in the process.
Features:
• Hybrid SACD from Analogue Productions
• Mastered by Kevin Gray at Cohearent Audio
• Compatible with both CD and SACD players
1. The Times They Are-A-Changin'
2. A 'Soalin'
3. 500 Miles
4. Blue
5. 3 Ravens
6. One Kind Favor
7. Blowin' In The Wind
8. Car-Car
9. Puff (The Magic Dragon)
10. Jesus Met The Woman
11. Le Deserteur
12. Oh, Rock My Soul
13. Paultalk
14. Single Girl
15. There Is A Ship
16. It's Raining
17. If I Had My Way
18. If I Had A Hammer