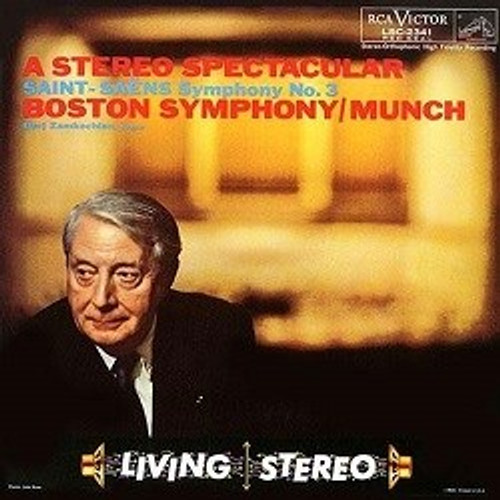 RCA's "golden age" was more like a "golden minute" - in a scant period, roughly from 1958 to 1963, the beginning of the stereo era - pure vacuum tube amplification helped produce recordings demonstrating unparalleled fidelity and warmth, lifelike presence and midband illumination.
This performance of Camille Saint-Saëns' "Symphony No. 3" (Organ Symphony) is a favorite Living Stereo release and to say that it's incredible might be an understatement! The recording reveals all of the glory of the great performances and the precision and passion of conductor Charles Munch, organist Berj Zamchokian and the Boston Symphony Orchestra in Boston's Symphony Hall. The original 3-track session tapes were used in mastering these LP and SACD reissues!
Pressed at Quality Record Pressings and plated by Gary Salstrom. Packaged in the original tip-on jacket facsimiles that precisely duplicate the original cover art, including the "Living Stereo" logo, LSC numbers and "Shaded Dog" label. These reissues are designed from the mastering, to the cutting, to the pressing and packaging to be the finest RCA Living Stereo LPs ever reissued. These new versions are clearer than the originals and warmer and richer than past reissues!
Musicians:
Composer - Camille Saint-Saëns
Conductor - Charles Munch
Organ - Berj Zamchokian
Boston Symphony Orchestra
A Stereo Spectacular - Saint Saens - Symphony No 3 - Zamchokian - Munch Track Listing:
1.   Adagio; Allegro Moderato; Poco Adagio
2.   Allegro Moderato; Presto; Maestoso; Allegro
1. Adagio; Allegro Moderato; Poco Adagio 2. Allegro Moderato; Presto; Maestoso; Allegro