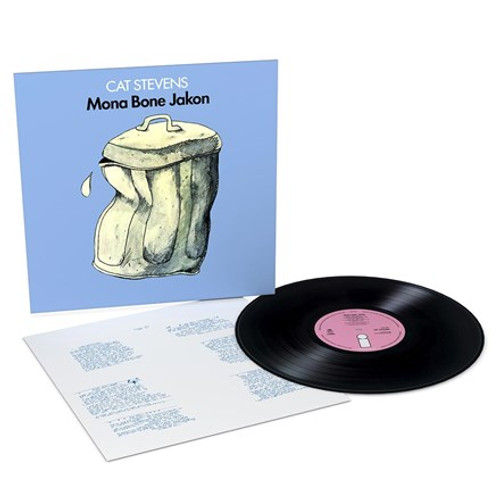 Before Tea for the Tillerman, a musical masterpiece widely lauded as one of the greatest albums of all time, a new deal with Island Records – A&M in the U.S. – saw the April 1970 release of Mona Bone Jakon. The album represents one of the most profound artistic metamorphoses of the 20th Century: the cleanly shaven Carnaby Street pop-star incarnation of Cat Stevens, who brought us "I Love My Dog" and "Matthew & Son," fades into the mist of a bygone era, emerging from the shadows as a new man, musician, and authentic lyrical master of metaphor, whose songs would help define a new genre for a generation of music lovers, and pave the way for a poignant new wave of soulful singer-songwriters.

Inspired by a near-fatal battle with TB and extended period of convalescence during which he studied classical music, metaphysical literature and meditative self-reflection, Mona Bone Jakon is equal parts painful torment, self-referential humor and spiritual awakening. It is deeply revealing of the man he was becoming and the journey he was embarking on that would last a lifetime. Through its stunning and often overlooked crop of songs we encounter an artist who has discovered himself but is unsure of whether the world will accept what he has become. The album has a deeply personal, almost vulnerable quality that, arguably, makes it the most compelling and human of all of Yusuf / Cat Stevens' work. Marking the start of a long-running creative partnership with producer (and former Yardbird) Paul Samwell-Smith, the album includes the deeply Romantic "Lady D'Arbanville," the spiritually uplifting "I Think I See The Light," the tongue-in-cheek "Pop Star" and the heart-rendering "Trouble."

As fresh and vital as the day it was recorded, Mona Bone Jakon has been newly remastered in 2020 in celebration of the iconic album's 50th anniversary!
Related Videos
How We Pack Your Records At Music Direct
Customers Also Bought