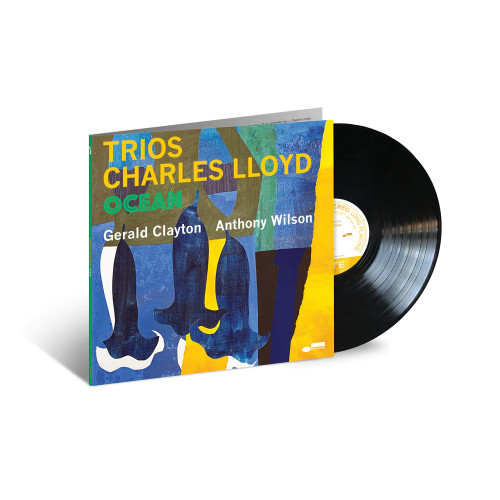 Be alerted when Charles Lloyd - Trios: Ocean (Vinyl LP) is back in stock

Charles Lloyd has long been a free spirit, master musician, and visionary. For more than six decades the legendary saxophonist and composer has loomed large over the music world, and at 84 years old he remains both at the height of his powers and as prolific as ever. Early on Lloyd saw how placing the improvised solo in interesting and original contexts could provoke greater freedom of expression and inspire creativity. And while he has recorded many classics of jazz in a piano, bass, and drums combination – the latest Passin' Thru from 2017 – all the while he has been open to, and has searched for, alternative ways to frame his improvisational skills.

This has formed a fascinating counterpoint to his work with his quartet; a few examples might include his early days in Memphis when he regularly jammed with pedal steel guitarist Al Vescovo. Later, during his period as music director for the Chico Hamilton Quintet he used flute (and tenor), trombone, guitar, bass, and drums. More recently there has been an album in duet with drummer Billy Higgins, while the configuration of one of his current groups, The Marvels, has both guitar and pedal steel guitar with bass and drums.

As a sound seeker, Lloyd's restless creativity has perhaps found no greater manifestation than on his latest masterwork, an expansive project that encompasses three individual albums that are connected by an overarching theme with each presenting him in a different trio setting – a Trio of Trios. The first, Trios: Chapel, features Lloyd with guitarist Bill Frisell and bassist Thomas Morgan. The second, Trios: Ocean, with guitarist Anthony Wilson and pianist Gerald Clayton. The third, Trios: Sacred Thread, with guitarist Julian Lage and percussionist Zakir Hussain.

The second album in the series Trios: Ocean was recorded in the 150-year-old Lobero Theater in Lloyd's hometown of Santa Barbara, California. It was live streamed without an audience on September 9, 2020, during the first year of the global pandemic. Lloyd was joined by Gerald Clayton on piano and Anthony Wilson on guitar, both sons of famous musician fathers – Gerald is the son of West Coast bass legend John Clayton, while Anthony is the son of celebrated bandleader, trumpeter, and composer Gerald Wilson, in whose big band Lloyd once played when he moved from Memphis to study at the University of Southern California when in his teens.