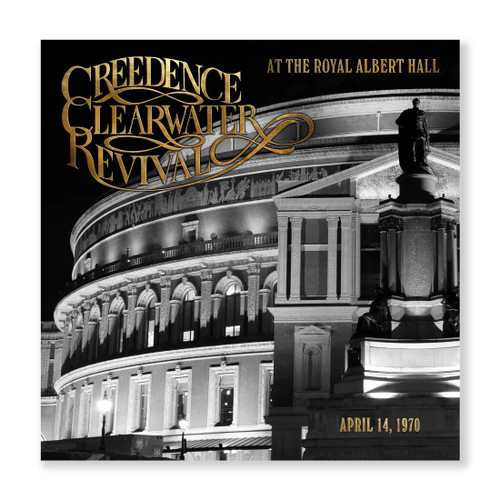 For decades, rumors have circulated among Creedence Clearwater Revival's fans about a long-lost recording of their legendary 1970 show at London's Royal Albert Hall. Now, Craft Recordings is thrilled to announce that the rumors are, indeed, true and the long-awaited Creedence Clearwater Revival At the Royal Albert Hall is presented here in its entirety!

When CCR took the stage for two nights in April of 1970, the band members had reached the height of their international stardom and arrived ready to prove themselves as equals to the likes of Led Zeppelin, Jimi Hendrix, and the Beatles, who had announced their breakup just days before. Their performance – which included hits like "Born On The Bayou," "Proud Mary," "Fortunate Son," and "Bad Moon Rising" – was met with a 15-minute standing ovation and rave next-day reviews in the UK's top publications.

After spending roughly 50 years in storage, the original multitrack tapes were meticulously restored and mixed by the Grammy Award-winning team of producer Giles Martin and engineer Sam Okell, who have helmed countless acclaimed projects together, including the Beatles' 50th-anniversary editions of Abbey Road and Sgt. Pepper's Lonely Hearts Club Band, as well as audio for the Elton John biopic Rocketman and Peter Jackson's The Beatles: Get Back Series. The LP was mastered by the celebrated engineer Miles Showell at Abbey Road Studios using half-speed technology for the highest-quality listening experience.