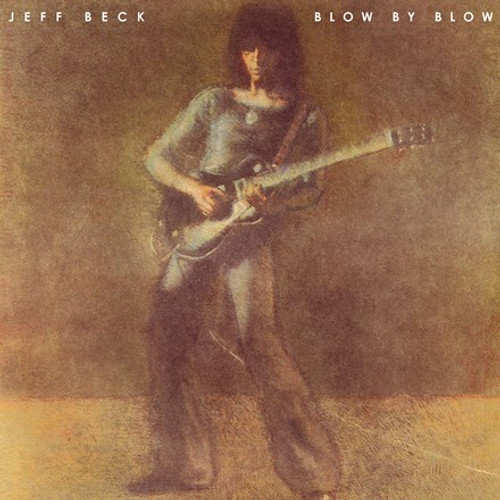 Jeff Beck’s position in the pantheon of great electric guitarists is indisputable. A rare breed of guitarist like Chuck Berry and Jimi Hendrix, Beck is not only compelling for what he plays, but for how he plays it. While some guitar players use racks of gear to create sound, Beck prefers a simple, natural approach that emphasizes manual dexterity over gadgets. Like few guitarists before him, Beck plays the entire guitar. Using his fingers instead of a guitar pick for greater speed and control over the fretboard, Beck adds deft twists of the volume and tone knobs to shape the notes as he’s playing them and further bends sounds into a rubbery tangle with his controlled cruelty on the whammy bar.
Following his departure from the Yardbirds in 1967, Beck started his solo career by exploring the heavier side of rock before switching gears in 1975 with the groundbreaking instrumental jazz-fusion albums, Blow By Blow and Wired. Produced by Sir George Martin, famed producer of The Beatles, the two albums shattered people’s preconceptions of what a rock guitarist was supposed to sound like. By fusing the complexity of progressive rock and improvisatory freedom of jazz with intergalactic guitar tones and a sense of humor, Beck opened up the horizon for future guitar instrumentalists like Steve Vai and Joe Satriani. They remain two of the top-selling guitar instrumental albums of all time.
Blow By Blow features nine imaginative tracks of instrumental genius as only Jeff Beck could provide. Originals like "You Know What I Mean," "Air Blower" and "Scatterbrain" have all become standards in the jazz/rock canon, while his beautiful cover of Stevie Wonder’s "Cause We’ve Ended Now As Lovers" illustrates even further the depth, technique and originality of his guitar artistry. Bolstered by the stellar musicianship of Max Middleton (keyboards), Phil Chenn (bass), and Richard Bailey (drums/percussion), plus the beautiful string arrangements of Martin, Beck and Co. truly delivered history here!
Features:
• 200g 45rpm 2LP-set from Analogue Productions
• Mastered from the analog tapes by Ryan Smith at Sterling Sound
• Pressed at Quality Record Pressings
• Deluxe 'Tip-on' gatefold jacket by Stoughton Printing
• Also available on Hybrid Stereo SACD
1. You Know What I Mean
2. She’s A Woman
3. Constipated Duck
4. AIR Blower
5. Scatterbrain
6. Cause We’ve Ended Now As Lovers
7. Thelonius
8. Freeway Jam
9. Diamond Dust