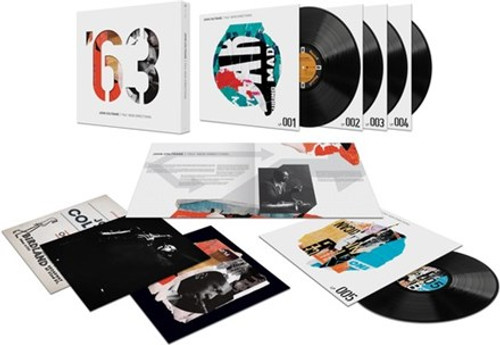 A Key Year In the Jazz Master's History Is Marked By A New 5LP Impulse! Collection!

Jazz icon John Coltrane has his 1963 masters collected in the 5LP box set entitled 1963: New Directions. The new Impulse! collection features material from Trane's recordings during that year from the albums Both Directions at Once: The Lost Album, John Coltrane and Johnny Hartman, Dear Old Stockholm, Newport ‘63 and Live at Birdland. 1963 came to be regarded as a point of transition between his previous jazz masterpieces and the genre-expanding music he went on to create.

The recently-released Both Directions at Once: The Lost Album was recorded by Coltrane's Classic Quartet on March 6, 1963. The following day, they went on to record standards with the American jazz singer and ballad specialist Johnny Hartman, for the John Coltrane and Johnny Hartman album, which went on to great success.

Coltrane was the most relentlessly exploratory musician in jazz history. His musical and spiritual journeys were intertwined and took him to places far beyond the reaches of any musician before, during or after his time on the planet. Trane's tonal and textural approaches on the tenor saxophone, his rhythmically complex soloing along with his signature modal melodic and harmonic compositional structures influenced generations of musicians across multiple genres (jazz, rock, avant-garde, experimental).

LP2
1. They Say It's Wonderful - John Coltrane & Johnny Hartman
2. Dedicated to You
3. My One and Only Love
4. Lush Life
5. You Are Too Beautiful
6. Autumn Serenade

LP4
1. I Want to Talk About You - Newport
2. My Favorite Things
3. Impressions

LP5
1. Afro Blue - Birdland
2. I Want to Talk About You
3. The Promise
4. Alabama
5. Your Lady
Related Videos
How We Pack Your Records At Music Direct
Customers Also Bought