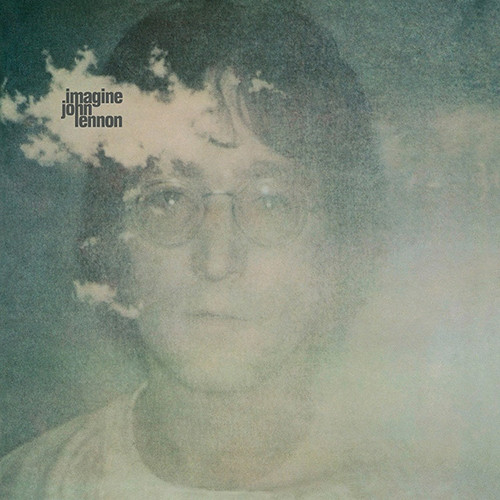 Remastered in 2010 from the Original Analogue Tapes by Yoko Ono & Team of Engineers from Abbey Road Studios in London and Avatar Studios in New York
Cut from the 24bit/96k HD Digital Transfers by Sean Magee at the World Renowned Abbey Road Studios
Powerful, poignant, important and beautiful are all words that describe Imagine – both the title song and the LP that was John Lennon’s second solo album release, in the autumn of 1971. One song does not make a great album, even when it is as seminal and defining as "Imagine" and make no mistake this is a great album, full of brilliant songs, with great hooks, but with John’s acerbic wit ever-present to avoid it from becoming the kind of music that he found irrelevant and meaningless.
Imagine is a very different album from Plastic Ono Band. This record is more instantly accessible, but let not that fool you into thinking John had gone soft. And like his previous album, Imagine has Yoko Ono’s influence all over it and no more so than in the brilliant title song. Yoko’s poetry, included in her 1964 book Grapefruit, helped inspire John’s lyrics for "Imagine," and also influenced the cover of the album.
Just what is it that makes "Imagine" such a perfect recording? From the opening bars of John playing the piano the song stakes its claim on our senses. The clever way the track is produced, to move the seemingly distant piano from the centre to the full stereo pan helps to accentuate John’s plaintive, and vulnerable, vocal. The subtly beautiful strings, scored by Torrie Zito, play their part in making this song the very creative peak of John and Yoko’s working together.
"Jealous Guy" has also become one of John’s best-known songs, helped in no small part by it having been covered by Roxy Music in early 1981 and taken to No. 1 on the UK charts. But it is a song that is ‘so John’, and its one that had its beginnings in India in 1968 before its full flowering when John rewrote its original lyrics that capture the feelings of a man in a love relationship or possibly it gives another view as to how John felt over the break up of the Beatles.
Acerbic and political, "Gimme Some Truth" highlights John’s way with words and succinctly sums up so much of what made John tick. John, always ahead of his time tackles the question of political leadership – just as relevant today as in 1971 – and this song acts as the bridge to what would follow in John’s song writing over the coming years.
"Oh My Love" is a beautiful and tender song, enhanced by George Harrison’s delicate guitar playing and John and Yoko’s wonderful words. From tenderness to harsh reality with "How Do You Sleep?," arguably the most notorious song on the album. Pigeonholed as John’s attack on Paul it is best explained by John himself. “It’s not about Paul, it’s about me. I’m really attacking myself. But I regret the association..."
And then it’s immediately back to the soft side of John with, "How?" and while it would be lyrically at home on his previous LP, its production is definitely of the “chocolate coating” variety. The album’s final song is the uplifting and beautiful, "Oh Yoko!," a simple song, but one that is simply lovely. And isn’t that what music should do? Of course, but it should also make you think, question and of course it should fill you with joy. Imagine does all these things and much more.
John Lennon Imagine Track Listing:
1.  Imagine
2.  Crippled Inside
3.  Jealous Guy
4.  It's So Hard
5.  I Don't Wanna Be a Soldier Mama I Don't Wanna Die
6.  Gimme Some Truth
7.  Oh My Love
8.  How Do You Sleep?
9.  How?
10. Oh Yoko!
Related Videos
How We Pack Your Records At Music Direct
Customers Also Bought