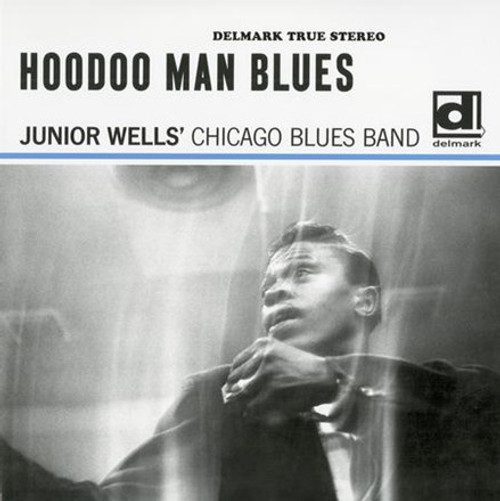 One of the all-time great urban blues records and the best-seller in the famed Delmark catalog. Hoodoo Man Blues is so full of bravado and snap it'll make you feel tough just listening to it. Not all of the Delmark titles were recorded very well, but this one certainly was. And at 180g 45rpm vinyl 2LP, this now stands as the undisputed definitive version. Hoodoo Man Blues, which features Buddy Guy on guitar, is not only Junior Wells' first LP appearance, it's damn near the first LP by a Chicago blues band. Chess and a few other labels had reissued 45s by Muddy Waters, Sonny Boy Williamson, Howlin' Wolf, Jimmy Reed, Elmore James, etc., but virtually no one had tried to capture the Chicago blues sound free of the limitations of juke box/airplay promotion. Hoodoo Man Blues went a long way in the popularization of real Chicago blues and of Junior Wells.

"This viscerally punchy electric blues is anchored by unimprovable harp playing from Junior Wells, a young Buddy Guy by his side. From the kick of up-tempo numbers like "Snatch It Back and Hold It" to the deep, sexy, slow moan of "Early in the Morning," you just can't top this. Current audiophile bona fides are in excellent order, thanks to fine remastering by Kevin Gray and Analogue Productions for 45 RPM..." – Sasha Matson, Stereophile's Records To Die For, February 2018

1. Snatch It Back and Hold It
2. Ships On the Ocean
3. Good Morning Little School Girl
4. Hound Dog
5. In The Wee Hours of the Morning
6. Hay Lawdy Mama
7. Hooddoo Man Blues
8. Early in the Morning
9. We're Ready
10. Do You Love Me, Baby
11. Chiltin Con Carne
12. Yonders Wall
Related Videos
How We Pack Your Records At Music Direct
Customers Also Bought