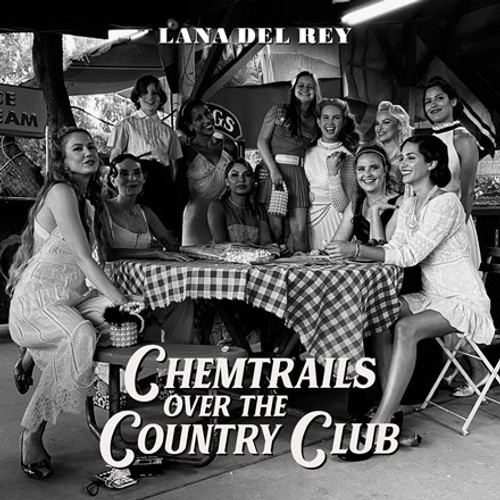 Chemtrails Over the Country Club marks Lana Del Rey's sixth studio album and follow-up to 2019's Norman Fucking Rockwell! The Grammy-nominated title, which was co-produced and co-written by Jack Antonoff (Taylor Swift, Lorde, St. Vincent) was both a critical and commercial success, debuting at No. 1 in the UK, and peaking at No. 3 on the Billboard 200. Del Rey's latest finds the retro singer-songwriter collaborating with Antonoff once again. It features eleven songs, including the singles "Let Me Love You Like A Woman" and the title-track "Chemtrails Over The Country Club." Zella Day and Weyes Blood appear on the Joni Mitchell cover "For Free."

Del Rey spoke about the project in Interview Magazine, "From the top, we knew what Norman was. But with Chemtrails, it was like, ‘Is this new folk? Oh, god, are we going country?' Now that it's done I feel really good about it." She adds, "I hear Chemtrails and I think...of my stunning girlfriends, who so much of the album is about, and my beautiful siblings. ‘Chemtrails' is the title track because it mentions them all and it mentions wanting so much to be normal and realizing that when you have an overactive, eccentric mind, a record like Chemtrails is just what you're going to get."

"...it is rare to find albums within the upper tier of mainstream pop that require time to percolate and get better with each listen rather than the reverse...but more than any other contemporary pop artist she has created a sonic universe of her own – lush, baroque, gothic, joyful and melancholic – and Chemtrails Over The Country Club is another great addition to it." - Susan Sloan, Louder Than War
Related Videos
How We Pack Your Records At Music Direct
Customers Also Bought