Price Now $139.99
Was
Was
Save $0.00 (0%)
This product is not eligible for further discounts.
Questions and Answers
Availability: In Stock
This item is in stock and ready to ship. Depending on the time of day when you place your order, it will ship same day or next business day. 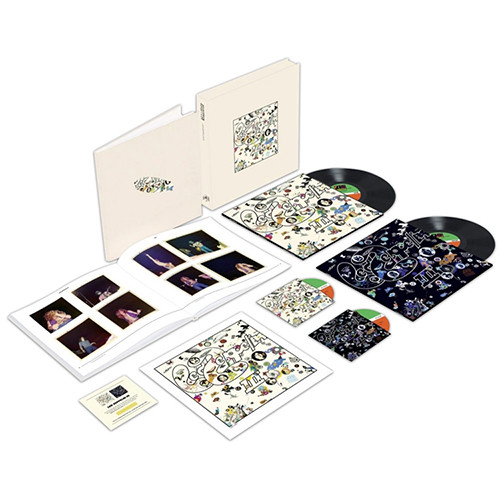 No matter how many times you've heard Led Zeppelin III, you've never heard or seen it in better quality than what's on the Super Deluxe Edition box set. This spectacular release contains both the 180g LP and CD of the remastered album, the previously unreleased companion audio on 180g LP and CD, a hardbound album-sized 80-page book with rare and previously unseen photos and memorabilia, a high-quality print of the original album cover, and a high-def audio download card of the musical content at 24-bit/96k. This is what all deluxe reissues should aspire to be.
Painstakingly remastered from the original master tapes by guitarist Jimmy Page, and pressed at Pallas (Europe's best plant), this 180g LP of Led Zeppelin III sounds utterly amazing. Page spent years on this project with one goal in mind: Making these reissues the end-all-be-all definitive editions of his iconic band's records. He has succeeded, and then some. In addition to the reference-caliber audio, each LP features packaging that fully replicates the look of the first pressing of the original album, down to the wheel and die-cut holes.

The companion audio for Led Zeppelin III: Super Deluxe Edition offer a clear window into the band's recording process, with seven studio outtakes of songs from the album as well as three previously unheard compositions: "Jennings Farm Blues" (an instrumental forerunner of "Bron-Yr-Aur Stomp"), "Bathroom Sound" (an instrumental version of "Out On The Tiles"), and the group's take on the blues classics "Keys To The Highway/Trouble In Mind."

Following the whirlwind success of their first two albums and near constant touring, Page and Robert Plant took to the now famous Bron-Yr-Aur cottage in Wales in 1970 to start the early composition of Led Zeppelin III. They later convened with John Bonham and John Paul Jones for rehearsals before entering London's Olympic Studios to begin recording in May 1970. Fueled by classic tracks such as "Immigrant Song" and "Since I've Been Loving You," the album soared to the top of charts worldwide upon its release in October of 1970 and has since been certified six-times platinum.