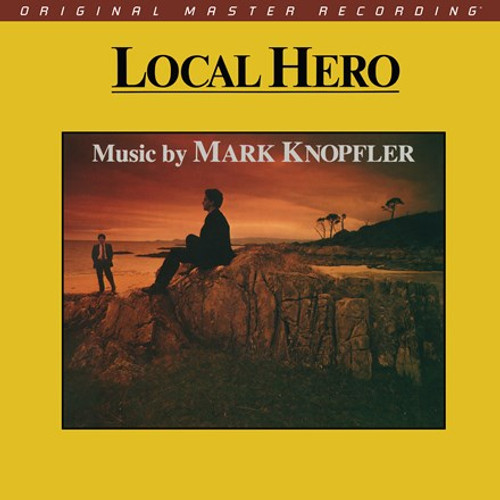 Three years removed from crafting Dire Straits' third album, Making Movies, band leader Mark Knopfler elected to adhere to the record's title and try his hand at doing just that in an aural way. Written and performed to accompany the film Local Hero, the iconic guitarist's first soundtrack continues to serve as one of the decade's most prized scores. No wonder the BAFTA Award-nominated work has long eclipsed the Bill Forsyth film in stature, merit, and popularity – and emerged as the basis of a stage musical that debuted in Scotland in 2019.

Mastered from the original master tapes and pressed at RTI on dead-quiet 180g vinyl, Mobile Fidelity's numbered-edition 180g LP of Local Hero gives the beloved effort audiophile-grade sound on a par with the reference-quality sonics afforded Dire Straits' Mobile Fidelity reissues. In each arrangement, Knopfler's methodical guitar lines emerge with supreme transparency and multi-hued textural detail. The intricate notes, finger-picked passages, and cosmopolitan lines come across as if they're transmitted just feet away from you in real time.

Ditto the diverse accompaniment, including the Celtic-themed effects, supplemental jazz accents, and folk inflections. The keys to the nearly 44-minute effort's success and continuity relate not only to Knoplfer's laidback style and low-key approach, but his ear for uncanny melody and blues traces. Woven acoustically and electrically, his tapestries benefit from the newfound airiness, openness, and balance that live on this reissue. No matter the instrument or treatment, the music arrives with pinpoint imaging and vibrant liveliness. Close your eyes, and the Mobile Fidelity version of Local Hero projects movies in your head.

For instance, take the closing "Going Home," a cherished instrumental whose proud spirit resonates with English football fans and features saxophone playing by the late, great Michael Brecker. Heard before every Newcastle United F.C. home game, it has become an anthem on both sides of the Atlantic. Or, look to "The Ceilidh: Louis' Favorite Billy's Tune" on which Scottish-flavored vibes and dance tempos conjure a festive jig until a transition gives the number a more subdued, romantic feel. Then, the pattern repeats. Seeking to expand beyond the parameters of Dire Straits, Knoplfer taps into a global economy of structures and sounds, and takes anyone with a sense of adventure along for the ride.

Not that his hallmark six-string is absent from the proceedings. It frames the lovely tin-pan whistle motif of the aptly titled "Whistle Theme," acts as a beacon for the elegant, vibraphone-kissed "Smooching," and pushes forward the jovial, top-down momentum of "Freeway Flyer," among other highlights. Knopfler also receives assistance from session pros Mike Mainieri, Steve Jordan, and Terry Williams, as well as vocalist Gerry Rafferty on the set's sole vocal tune, "That's the Way It Always Starts."