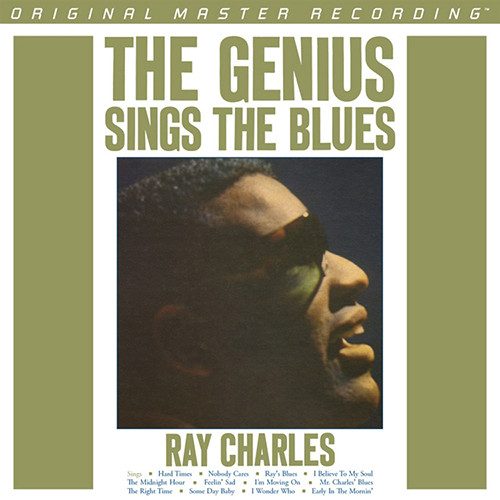 Genius doesn't even begin to describe the greatness of The Genius Sings the Blues. Comprised of a dozen songs Ray Charles made between 1952 and 1960, the collection was released in 1961 by Atlantic Records to counter the singer's migration to rival ABC Paramount. What Atlantic originally underestimated is that the album contained many of Charles' greatest works, all unified by their bluesy emotions and stirring arrangements. A classic of the soul and R&B canon, The Genius Sings the Blues is a snapshot of the evolution of timeless American music captured by the pianist's indelible rhythmic pace, gospel roots, jazz backgrounds, and Southern-styled accents. And it's never sounded so good.

From the iconic cover art (a photo of Charles taken by legendary photographer Lee Friedlander) to the distinguished music within, everything about the thematic record is iconic. Now, nearly 50 years later, it can be heard in pristine fidelity sourced from the original mono master tapes. Mobile Fidelity's engineers have taken great pains to ensure that every clink of the piano keys, ache of Charles' rolling voice, and rush of the backing arrangements sounds better than they have since first being recorded in the studio.

Whether inhabiting the sadness in "Night Time (Is the Right Time)" or personifying the loss of "Hard Times," Charles invests each song with supreme emotion and undeniable conviction that makes the lyrics ring true and the blues resonate with cathartic pathos. Uptempo country blues numbers ("I'm Movin' On, "Early in the Mornin'") balance the mournful slow fare, and again prove Charles a master composer, interpreter, and musician who could make any style his own. The Genius Sings the Blues also speaks to legendary jazz pianist Billy Taylor's initial impressions of Charles upon hearing him in a way in which few other Charles recordings do.

Taylor recalled: "While playing through some new music for a projected Ruth Brown record date, I was asked to listen to an original song played and sung by a young composer and pianist from Seattle, Washington. I can still remember how surprised I was to hear this kind of music from a Northwesterner. He reminded me of Charles Brown, another pianist-singer who was very popular in the Forties, but he had a very personal sound and there was something different about his rhythmic approach. In his handling of melody he seemed to be using devices similar to those used by Dinah Washington and a small group of popular singers who allowed their gospel singing backgrounds to influence their interpretation of popular songs... I was intrigued by the emotional quality projected by both his piano playing and his unusual voice and was not surprised when Ahmet Ertegün said that he wanted to let the young musician record some of his own material. 'He communicates just like the old blues singers,' Ahmet said."

Indeed, that innate blues aesthetic dominates this collection, as does Charles' distinctive rhythmic mannerisms. Hear them as they've always been intended to be experienced on this superb-sounding LP!