Price Now $199.99
Was
Was
Save $0.00 (0%)
This product is not eligible for further discounts.
Questions and Answers
Availability: In Stock
This item is in stock and ready to ship. Depending on the time of day when you place your order, it will ship same day or next business day. 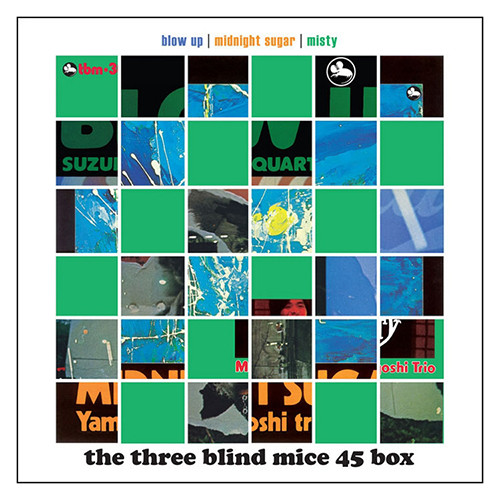 Return of the Revered Three Blind Mice 45-RPM Box w/ Improved Jackets, Exclusive Wood Lift-Top Box and New Insert w/ Rare Photos & Notes by Tom Schnabel
Featuring 3 Highly Sought After & Acclaimed Titles including Isao Suzuki's Blow Up and The Yamamoto Trio's Midnight Sugar & Misty
Mastered by Tohru Kotetsu (Midnight Sugar, Misty) and Kevin Gray (Blow Up)
Finally returning after a long and mysterious absence, Impex’s new pressing of the highly collectible Three Blind Mice 45 Box has been improved in almost every way: a new full-cover wood box, newly rendered LP jackets with improved clarity and color, a deluxe four-color insert with session photos and brand new notes by noted radio personality and audiophile Tom Schnabel (“Rhythm Planet”/ KCRW Los Angeles).
For all those who missed out on that first, very limited run, here's a chance to have the Japanese jazz recordings that even 40 years later still set the standard for you-are-there reality. Mastered by Tohru Kotetsu (Misty, Midnight Sugar) and Kevin Gray (Blow Up) and pressed at RTI, this limited-edition (3,000) set will live up to and surpass all of your most demanding expectations. Just another way Impex Records is redefining definitive!
Isao Suzuki's Blow-Up is virtuosity and class all rolled up into one! A great combination of upbeat blues and mellow grooves, the album was awarded the 'Jazz of Japan Award' and the 'Jazz Disk Award' from Swing Journal in 1973.
The Yamamoto Trio's Midnight Sugar was recorded on March 1, 1974 at Aoi Studio, Tokyo. On Midnight Sugar the Tsuyoshi Yamamoto Trio plays two of Tsuyoshi’s own blues improvisations followed by jazz ballads that became standards for the Trio. It earned the 'Best Engineering Award' and 'Jazz Disc Award' from Swing Journal in 1974. It is Yamamoto’s unmistakable skill and his jazz feeling which adds that certain touch of liveliness and spontaneity and makes Midnight Sugar a unique experience of the highest order.
The Yamamoto Trio's Misty is a stone cold killer and top of the line reference material recorded at Aoi Studio in Tokyo, on August 7, 1974. Touring with the Micky Curtis Band through France, England and Switzerland, Yamamoto had the chance to explore several international experiences that he would later use as inspiration here. Misty earned both the 'Best Engineering Award' and 'Jazz Disk Award' from Swing Journal in 1974. Yamamoto is highly musical and his expressions are natural here, neither overly technical nor serious, his performance is both relaxed and melodious.
Blow-Up:
Isao Suzuki, bass & cello
Kunihiko Sugano, piano
Takashi Mizuhashi, bass
George Otsuka, drums
Misty & Midnight Sugar:
Tsuyoshi Yamamoto, piano
Isoo Fukui, bass
Tetsujiro Obara, drums
Features:
• 180g 45rpm 6LP box set
• Mastered by Tohru Kotetsu & Kevin Gray
• Pressed at RTI
• Deluxe four-color insert with session photos & brand new notes by Tom Schnabel
• New full-cover wood box, newly rendered LP jackets
Three Blind Mice The Three Blind Mice 45 Box Contents:
LP1 - Blow Up
1. Aqua Marine
2. Everything Happens To Me
3. Blow Up
LP2 - Blow Up
1. Like It Is
2. I Can't Get Started
3. Low Flight
LP3 - Midnight Sugar
1. Midnight Sugar
2. I'm A Fool To Want You
LP4 - Midnight Sugar
1. The Nearness of You
2. It Could Happen To You
3. Sweet Georgia Blues
LP5 - Misty
1. Misty
2. Blues
3. Yesterdays
LP6 - Misty
1. Honeysuckle Rose
2. Smoke Gets In Your Eyes
3. I Didn't Know What Time It Was
4. Angel Eyes
Related Videos
How We Pack Your Records At Music Direct
Customers Also Bought