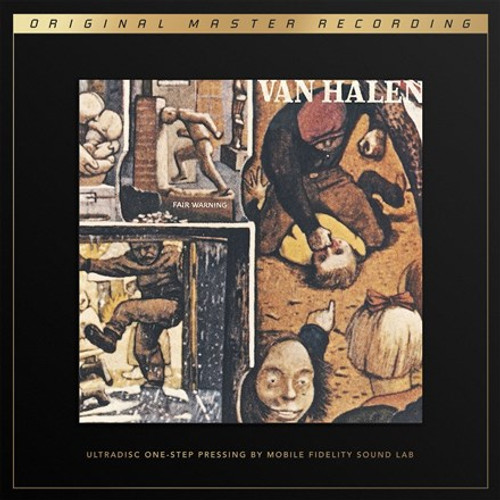 Mastering Source to Be Determined Closer to Production Date; Specifics Will Be Posted Here When Authenticated

The song titles on Van Halen's aptly titled Fair Warning don't lie. The likes of "Unchained," "Mean Street," "Push Comes to Shove," "One Foot Out the Door," and more indicate the mood the band channels on its 1981 record. It's the nastiest, darkest, and fiercest album of the group's storied career. Guitarist Eddie Van Halen uses the forceful arrangements as a playground for his seemingly unlimited arsenal. Supported by a crack rhythm section and an inspired David Lee Roth, he performs with an almost impossible combination of punk-like intensity, technical finesse, lyrical fluidity, and unbridled emotion. For the fourth time in four years, Van Halen threw down the gauntlet to all challengers and emerged victorious. Mastered from the original analog tapes, pressed on MoFi SuperVinyl, and strictly limited and numbered, Mobile Fidelity's UltraDisc One-Step 180g 45RPM 2LP set sounds the alarm with unfettered clarity, dynamics, and immediacy.