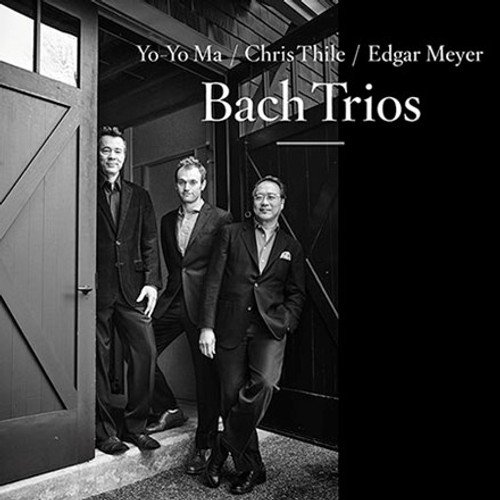 Be alerted when Yo-Yo Ma, Chris Thile and Edgar Meyer - Bach Trios (Vinyl 2LP) is back in stock

Nonesuch Records releases an album of J.S. Bach works recorded by cellist Yo-Yo Ma, mandolinist Chris Thile, and bassist Edgar Meyer. Bach Trios comprises works by Bach originally written for keyboard instruments, plus one sonata for viola da gamba and features arrangements of pieces from The Well-Tempered Clavier, The Art of Fugue, and more. The Times of London calls Bach Trios "effervescent" and "irresistible." In 2011, Ma, Thile, and Meyer – along with Stuart Duncan – collaborated on The Goat Rodeo Sessions, which won two Grammy Awards.

Yo-Yo Ma and Edgar Meyer's first recording together was the 1996 album Appalachia Waltz, which also featured fiddler Mark O'Connor; that album was followed by Appalachian Journey, also with O'Connor, in 2000. Meyer and Thile also began playing together nearly two decades ago, and first performed live as a duo in 2003. They have made two duo albums, 2008's Edgar Meyer & Chris Thile and the Grammy-winning 2014 record Bass & Mandolin.

Thile then joined Meyer on Ma's 2008 holiday album, Songs of Joy and Peace, before the trio reunited, along with Stuart Duncan, for The Goat Rodeo Sessions, an album of original tunes drawing from the musicians' backgrounds in bluegrass, classical, and American roots music. The Goat Rodeo Session debuted at No. 23 on the Billboard 200 chart and No. 1 on the classical and classical crossover charts, as well as No. 1 on the bluegrass chart, where it stayed for eleven weeks.