Equipment Accessories Analog Accessories
Price Now $199.00
Was
Was
Save $0.00 (0%)
This product is not eligible for further discounts.
Questions and Answers
Availability: In Stock
This item is in stock and ready to ship. Depending on the time of day when you place your order, it will ship same day or next business day. 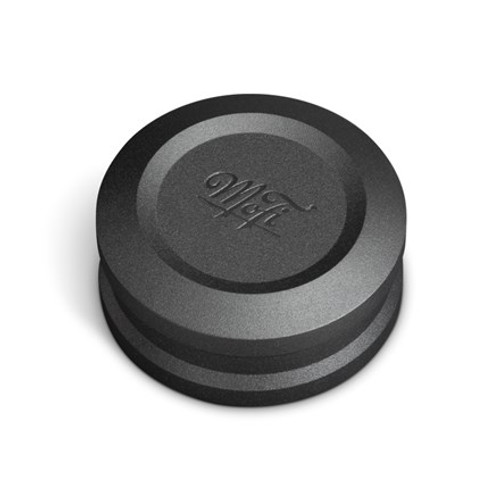 Mobile Fidelity's Super HeavyWeight is unlike any record weight you've ever seen or used. Developed in conjunction with Harmonic Resolution Systems engineers and compatible with any turntable setup, its revelatory abilities go far beyond simply coupling the record to the platter – the duty performed by nearly every other type on the market. In addition to superb coupling, Super HeavyWeight literally drains groove noise away from your stylus, audibly improving clarity and impact. That's correct: Super Heavyweight acts as a noise-dissipation device that eliminates resonance, elevates resolution, and enhances stability – feats that translate into greater dynamics, firmer instrumental foundations, and better definition.

Designed with a proprietary HRS polymer selected for its noise-absorbing properties, Super HeavyWeight features a carefully chosen mass that will never put a strain on your turntable's motor, suspension, or bearing. Built from a machined billet aluminum outer shell, it's easy to grip. And the universal non-threaded design makes its simple and quick to use. For further security, Super HeavyWeight has a soft polymer underside that won't damage the record labels on your LPs.

Whether you're a seasoned analog pro or just getting into the hobby, and whether you have a reference or entry-level turntable, Super HeavyWeight will pay instant sonic dividends. We encourage you to audition this on your 'table. If you don't immediately hear improvements, just send it back using the Music Direct Satisfaction Guarantee, no questions asked.

"Adding the Super Heavyweight puck increases the 3D effect and improves tonal depth, especially through the midrange. Timing likewise jumps up a step or two. The UltraDeck+M is still a smooth-sounding assembly, but the puck adds extra grip, if you'll excuse the pun."
– Jason Kennedy, Hi-Fi+

"With many different LPs, I switched between using and not using it. In combination with the StudioDeck's Delrin platter, the HeavyWeight consistently resulted in greater solidity and dead-silent backgrounds."
– Thom Moon, SoundStage! Access