Equipment Amplification Integrated Amp
Price Now $2,299.00
Was $3,300.00
Was
Save $1001.00 (30%)
Questions and Answers
Condition: B-Stock
Availability: In Stock
This item is in stock and ready to ship. Depending on the time of day when you place your order, it will ship same day or next business day. 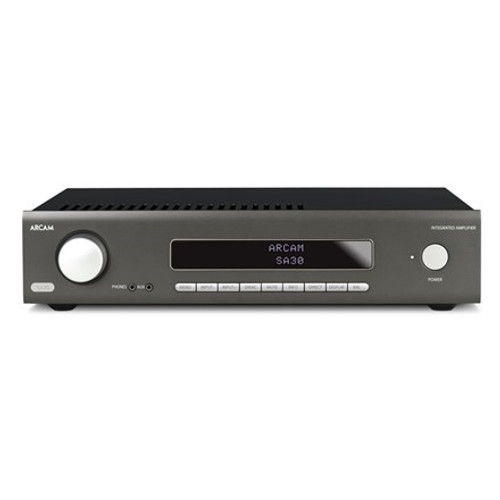 To meet the increasing needs of modern users, integrated amplifiers have to not only sound pure, clean, and dynamic – they must have the same intelligence-oriented capabilities as other smart devices, all the while being able to drive speakers with ease. The winner of the prestigious 2020-2021 EISA Award for Best Amplifier, the Arcam SA30 knows this – and scores high on the audio Mensa test. As the successor to Hi-Fi+ Product of the Year Award-winning SA20, SA30 improves upon its predecessor in every way, starting with a bodacious output of 120Wpc into eight ohms (and a boggling 220Wpc into four ohms). MQA decoding, Roon endpoint functionality, a switchable MM/MC phono input, four more analog inputs, front-panel headphone jack, eARC support, and customizable remote control continue the hit parade.

Equipped with a 32-bit SABRE ESS9038K2M DAC, the bi-ampable SA30 is made for streaming. It boasts onboard GoogleCast, Apple AirPlay 2, and a UPnP streamer that allow you to wirelessly play music from mobile devices in a snap. Four digital inputs and full I/P control (including Crestron and Control4) invite you to implement SA30 in practically any kind of setup and command its functions with ease. As for its efficiency and ultra-low total harmonic distortion/noise ratio (0.002%)? Just wait until you hear how smooth, detailed, resolved, and present your music appears when reproduced by SA30. The secret? Class G amplification.

Honed to perfection at Arcam during years of testing and implementation by the company's engineers, SA30 employs Class G amplification. This engineering solution eliminates crossover distortion and any potential power shortages during extreme swings (sometimes suffered by Class A amplification). The result: Nothing at all close to Class D amplification, and truly the best of all worlds.

If that wasn't enough, the sleek SA30 also comes with Dirac Live room correction, a feature that alone proves itself worth the cost of the entire unit. Via a supplied calibration microphone, the suite measures, analyzes, and compensates for any shortcomings in your room. Three Dirac EQ profiles – all input-assignable – ensure the results will be nothing short of brilliant. 100% Music Direct Guaranteed.

"The [SA30] has all the sonic smoothness, scale and powerful muscularity we've come to expect from Arcam components and their Class G amplification... [It's] appetite for vocals is exemplary. That pleasing clarity and subtlety is presented on a big, spacious and tonally even canvas – one that puts space between the melodic electric strings and the acoustic strums they sit on top of, without sacrificing their intended interplay."
—What Hi-Fi?, five-star review

"Yes, the sound is still very Arcam, being rich and just a bit lush rather than all-out attacking, making this not only an amplifier with the wherewithal to drive speakers extremely well, but also one with a sonic balance that makes speaker-matching easy."
—Mark Craven, Hi-Fi News, Outstanding Product

"It will stream, and you can plug in everything from your TV to a turntable, while DIRAC room correction is offered to optimise the sound, using a computer and the supplied microphone. It's not just a technical tour de force, it's also a storming amplifier."
—EISA, 2020-2021 Best Amplifier Award

"Separation and focus both impress, and the ease with which individual elements of a recording can be followed is far from typical in products of this type and price. The Arcam makes some pertinent observations about the string gauge of the acoustic guitar, the tension of the skin of the snare drum, the almost supernatural sympathy of the vocal harmonies... As far as clarity, fine detail retrieval and the fundamental timbre of instruments are concerned, the SA30 is a thrillingly direct and communicative device."
—Simon Lucas, Hi-Fi+

"It dishes the midrange details with particular relish, it sounds big and well organized, and its tonal balance errs pleasantly on the side of the natural and organic. It's dynamic, but never at the expense of insight; it's expansive, but never sounds disjointed."
—Hi-Fi+, Integrated Amplifier of the Year (Up to £10,000) Award

Dirac Live is a mixed-phase room correction technology used in cinemas, studios, and luxury cars. With Dirac Live you can easily measure the acoustic characteristics of your loudspeakers and room, and calibrate the sound system to reproduce sound as intended. It corrects not only the frequency response but also the impulse response, a factor critical for accurate staging, clarity, and bass reproduction. Dirac Live will: