Equipment Amplification Integrated Amp
Price Now $1,095.00
Was $1,195.00
Was
Save $100.00 (8%)
Questions and Answers
Availability: In Stock
This item is in stock and ready to ship. Depending on the time of day when you place your order, it will ship same day or next business day. 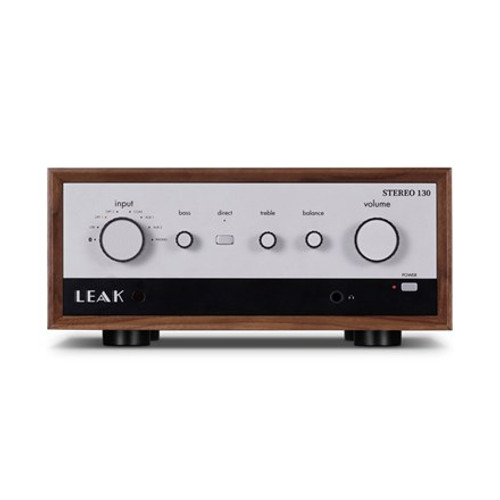 Leak makes its triumphant return to the market after a multi-decade absence with an integrated amplifier inspired by the vaunted British company's iconic Stereo 30. Featuring old-school looks and modern functionality, the conservatively rated 45Wpc Stereo 130 delivers high-fidelity performance from both analog and digital sources while making a visual statement (just look at that walnut cabinet and the clean control knobs) in any room in which it resides. Most importantly, the signature Leak sound – engaging, detailed, refined, with excellent timing and expressiveness, persists no matter how you listen.

Consider: A built-in MM phono preamplifier leverages a JFET-based circuit for precise RIAA equalization and warm, rich vinyl playback. On the other end of the spectrum, the inclusion of an ESS ES9018 SABRE 32 Reference DAC with 32-bit HyperStream architecture and a time domain jitter eliminator translates to arresting streaming potential up to DSD256 and 384kHz PCM. A USB-B input accompanies aptX Bluetooth support, while two pairs of analog inputs, one pair of analog outputs, and two digital outputs speak to its flexibility.

Headphone users also can get in the game. A dedicated circuit with current-feedback technology offers high-speed transmission, a high slew rate, and the ability to drive most 'phones to their potential further enhances Stereo 130's one-box value. Ditto Leak's traditional direct switch to bypass steps in the analog stage for a pure signal path, as well as the manufacturer's famed tone controls for matching and tweaking. And if you choose to pair it with the matching CDT CD transport, you'll have a compact system that may just take you back to Britain in the 1960s. 100% Music Direct Guaranteed.

"Combined with the matching Leak CDT transport, [Stereo 130] makes for a great pair that not only offers great sound, but a glimpse into audio's past."
– TONEAudio