Equipment Amplification Integrated Amp
Price Now $4,499.95
Was
Was
Save $0.00 (0%)
Questions and Answers
Availability: In Stock
This item is in stock and ready to ship. Depending on the time of day when you place your order, it will ship same day or next business day. 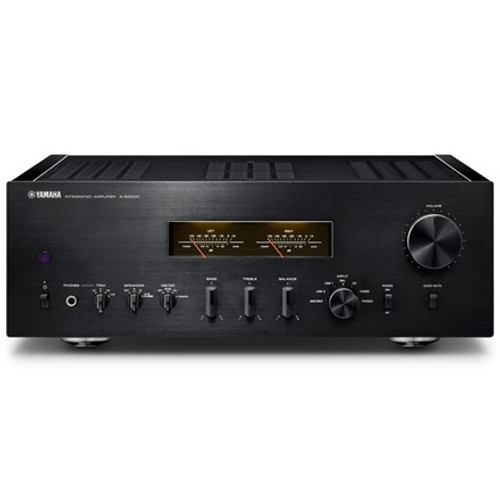 Fully balanced from input to output, the Yamaha A-S2200 integrated amplifier is more than just a pretty face. But even we admit we've seldom seen a component that better combines coveted retro appeal — dig the illuminated VU meters and sleek brushed aluminum face plate — with modern looks. Outputting 90Wpc of pure, natural, expressive sound, its feature set includes everything from a perfectionist-minded volume control to a fully discrete MM/MC phono preamplifier and discrete, reference-level headphone amplifier for private sessions. A massive power supply with four separate circuits, tone control circuitry with a parallel volume system, and left-right symmetrical architecture further contributes to its dynamic, responsive, and detailed fidelity. Friends, this is what discerning listening is all about.

Elegant in appearance, simple in operation, and exceedingly satisfying in performance, A-S2200 touts floating balanced circuitry for the power amplifier section and a pair of XLR inputs for supreme connectivity. Inside, heavy-gauge ground wiring between stages and short power paths to preserve the integrity of the original signal. For the terminals, welded connections and brass screws translate into lower impedance. A plethora of hand-selected components — including Shinyei PP film capacitors, Toshin film capacitors, and PC-Triple C internal speaker wire — work to maintain the integrity of the recording and boost your emotional responses to it. Yamaha's Mechanical Ground Concept — in which the power transformer, four 22,000uF block capacitors, and large heat sinks are directly bolted to the chassis — as well as a brass mounting plate and welded brass foot mounts also reflect how seriously A-S2200 takes its tasks. Ditto the machined brass speaker terminals, which accept banana, spade, and bare wire.

The Mechanical Ground Concept adopted in A-S2200 maximizes rigidity and reduces any unwanted vibration, achieving expressive and rhythmic bass. Further rigidity is achieved with the large power transformer, block capacitors and heat sink directly bolted to the chassis while the feet, with bolts directly welded to the main chassis, provide further reinforcement for absolute rigidity.

A toroidal power transformer, renowned for superior performance in hi-fi components, has been appointed to power A-S2200. Its ability to maintain energy when compared to substitutes aids A-S2200 in delivering all the emotional energy of the artist infused in the music.

A naturally open soundstage is achieved through a culmination of design and component selection. Thick wires for ground connection were purposely selected, adding to the overall low impedance amplifier design, producing a wide and open soundstage. Consequently, the components disappear, leaving the artist in their place.

The level meters are both a nod to hi-fi's nostalgic era while simultaneously demonstrating the importance of pure fidelity for today's discerning enthusiast. Visually presenting the dynamics and pulse of the music, the level meters imbue a warm feeling through their softly illuminated LEDs.