Equipment Amplification Power Amp
Price Now $1,399.99
Was
Was
Save $0.00 (0%)
Questions and Answers
Availability: In Stock
This item is in stock and ready to ship. Depending on the time of day when you place your order, it will ship same day or next business day. 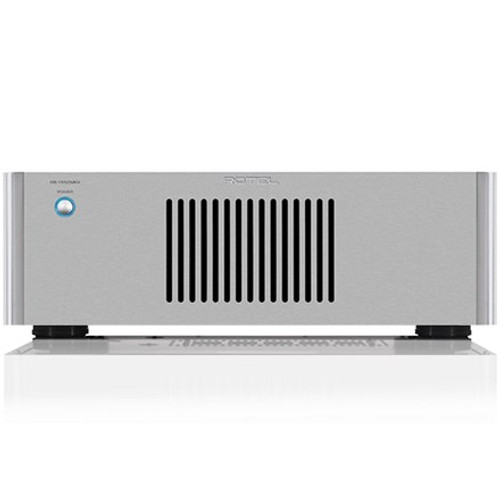 High-end values don't come much better than this. The Rotel RB-1552 MkII power amplifier is designed, engineered, and constructed to drive most speakers with proper timing, poise, control, and authority. Able to provide the brawn needed for complex passages as well as the grace for delicate nuances, RB-1552 MkII is resolved and refined, dynamic and detailed, fast and confident. Its high-current 130Wpc output, efficient operation, balanced XLR inputs, independent left-right power rectification stages, and left-right channel monoblock design attest to its sonic prowess.

Purpose-built in an in-house factory, the 27-pound RB-1552 MkII's large toroidal transformer combines with special "slit foil" capacitors to provide completely stable power to the output stage. The capacitors also have the ability to rapidly charge and discharge, ensuring signal fidelity during orchestral crescendos or repetitive kick-drum impacts, for example. All grounding gets terminated in a star pattern on a copper grounding plate for ultra-low signal-to-noise ratios. Moreover, the discrete output stage consists of 10 high-current bipolar transistors per channel. The Class AB RB-1552 MkII also includes a pair of unbalanced RCA inputs in addition to two sets of speaker terminals.

Supplied with ears for optional rack mounting, RB-1552 MkII has a 3U high front panel and sleek, utilitarian look that can enhance your listening space. The implementation of Rotel's Balanced Design Concept (read more below) and our 100% Music Direct Satisfaction Guarantee invite you to experience the difference RB-1552 MkII can make for your music in your own home.

"[It] boasts the sort of holistic design and careful parts-selection that have distinguished Rotel's best amps through the ages."
—Alan Taffel, The Absolute Sound