Equipment Phono Cartridges
Price Now $419.00
Was
Was
Save $0.00 (0%)
Questions and Answers
Availability: In Stock
This item is in stock and ready to ship. Depending on the time of day when you place your order, it will ship same day or next business day. 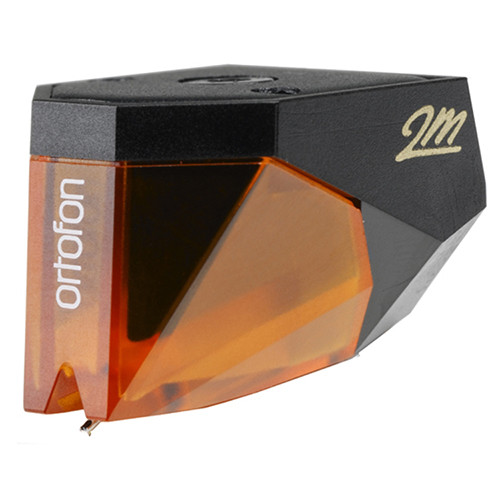 The Ortofon 2M Bronze features a nude Fine-Line stylus, polished to the highest standards. The slimmer profile of this stylus will track even the highest frequency modulations, making this cartridge better suited for extremely demanding material. Surface noise is kept to a minimum due the stylus profile. Distortion and record wear are substantially reduced. The Bronze is serious bargain at this price.

The 2M series was developed in conjunction with Danish designer Møller Jensen Design – the same designer who designed the award winning MC Jubilee and very successful Kontrapunkt series.  Inspired by the facets of a diamond, whose contours gracefully trace the grooves on a record's surface, the 2M's handsome elegance establishes a great combination of form and functionality.

"[What] I would say about the Bronze is that it is a mixture of all of these sonic virtues. It's fast, but not ostentatiously so; it turns information into music, and it does this because it is better balanced, neither leaning in one sonic direction or another. I would say that it represents not just the [Ortofon] 2M line's sweet spot but also its musical core."
—Marc Mickelson, The Audio Beat

"The 2M Bronze offers a full-bodied listening experience. It really brings music that has a lot of highs to life; think of crystal-clear high-hats, violins, piano, or higher frequencies in electronic music. If you are like me and listen to wide variety of music, I can say you should be happy with the Bronze for the money you spend.... If you feel as though you could benefit from a cart upgrade on your 'table, I can say the Ortofon 2M Bronze should be on your list."
—HiFi Chicken