Price Now $50.00
Was
Was
Save $0.00 (0%)
This product is not eligible for further discounts.
Questions and Answers
Availability: In Stock
This item is in stock and ready to ship. Depending on the time of day when you place your order, it will ship same day or next business day. 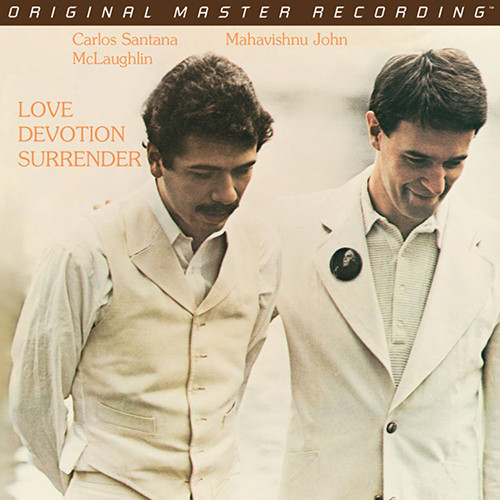 Two guitar giants. A collective band comprised of virtuosic instrumentalists. One shared goal. And one tremendous album, commonly referred to as the equivalent of aural nirvana. Still the only meeting of Santana and John McLaughlin, Love Devotion Surrender more than lives up to the promise offered by its principal creators as it’s a spiritual journey based in divine faith, religious toleration, and the forward-thinking philosophy that music can take us closer to the truth. These enlightening concepts are reflected in the playing of Santana and McLaughlin, who repeatedly hit a higher plane on this stunning 1973 set.

Having each become a follower of Indian guru Sri Chinmoy, Santana and McLaughlin began playing together in 1972, with each legend currently in the midst of personal and creative transition. Santana was moving away from rock-based songs in favor of exploratory jazz-rock fusion. McLaughlin had already achieved fame with the Mahavishnu Orchestra, on the brink of collapse due to disagreements within the band. On Love Devotion Surrender, the duo pools its interest in spirituality and transcendence into expressively gorgeous art steeped in improvisational lines, ecstatic chords, and sensitive organ accompaniment courtesy of the record’s best-kept secret, Larry Young.

In addition to the search for sacred soulfulness, the common denominator throughout is John Coltrane, who engaged in similar pursuits during the 1960s. Two of the five compositions are interpretations of Coltrane standards while the lynchpin, a nearly 16-minute investigation into the traditional “Let Us Go Into the House of the Lord,” seamlessly integrates melodic structure, jazz phrasing, gospel mysticism, and tonal shaping into one of the most hopeful and uplifting pieces of music you’ll ever hear.

Laden with delicate acoustic touches and gentle piano touches as well as powerful staccato bursts and fast-paced bongo percussion, Love Devotion Surrender contains a highly dynamic mix of tempos, textures, and contrasts that have never shone like they do on Mobile Fidelity’s numbered-edition hybrid SACD. This audiophile edition brings the performers’ spirituality to the fore with extraordinary realism, while the pinpoint imaging—Santana primarily on the left, McLaughlin on the right—allows each musicians’ contributions to soar.

"This SACD…joins the ranks of several '70s jazz LPs have come alive on digital and LP remasterings in the 21st century, the products of more sensible mastering. Th[e] newly buffed up SACD mastering from Rob LoVerde is equally fine and improves upon the original LP in similar ways. You can now turn the music up (and this music calls for it) without having your whole system plunge into a sea of distortion."
– Dennis Davis, The Audio Beat