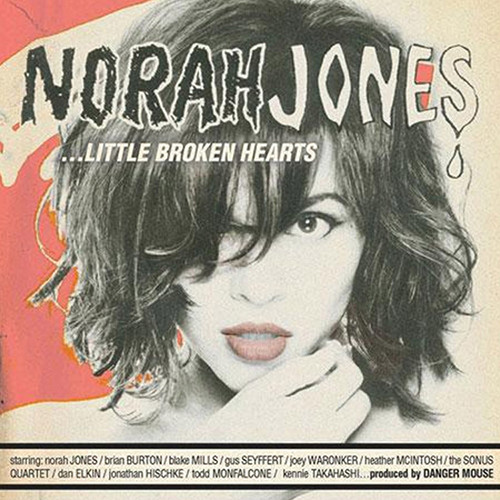 Be alerted when Norah Jones - ...Little Broken Hearts (Hybrid SACD) is back in stock

Re-mastered from the Original Source Recordings by Kevin Gray at Cohearant Audio!

Norah Jones is the rare artist who has combined widespread critical acclaim with immense commercial success, winning nine Grammy Awards and selling 40 million albums in just a decade, while collaborating with artists from across the spectrum from jazz to hip hop, rock to country! Her pitch perfect voice combined with her choice of the finest musicians along with top-flight producers such as Arif Mardin, Danger Mouse and Jacquire King have made her releases go-to demonstration discs for audiophile stereo systems.

Now ten years into her already impressive career, she is releasing her fifth studio album Little Broken Hearts, produced by and co-written with five-time Producer of the Year Grammy nominee Danger Mouse, and to celebrate, Blue Note Records and Analogue Productions are collaborating to re-issue her entire catalog on audiophile 200g LP and Hybrid SACD editions.

The Hybrid SACD editions of the five albums, 2002's Come Away With Me, 2004's Feels Like Home, 2007's Not Too Late, 2009's The Fall and Norah's new album Little Broken Hearts, have all been re-mastered from the original sources by Kevin Gray at Cohearant Audio.

Little Broken Hearts is the stunning and musically diverse new break-up album from Norah Jones and fifth full-length of her storied career. The 12-song set was produced by Danger Mouse (aka Brian Burton) and features original tracks co-written by Jones and Burton. This is their second time working together, Jones previously appeared as a vocalist on Rome, Danger Mouse’s collaboration with Italian composer Daniele Luppi. Though Little Broken Hearts is the result of a partnership between Jones and Danger Mouse, the record will be credited only to her.

The album’s sound ranges from experimental chamber serenades to stark, electronic-embellished confessions and is preceded by the lead single "Happy Pills" which ushers in a parade of sunshiny hooks and surprised both Jones and Burton from the moment they wrote it: “We didn’t know if it fit on the record. But I couldn’t stop singing it, and neither could Brian." explains Jones. "Eventually we decided it was too much fun, it had to be there.”

Little Broken Hearts’ is the fascinating next step in the artistic evolution of one of the music world’s most consistently intriguing singer/songwriters. Jones first emerged on the world stage 10 years ago with the 2002 release of Come Away With Me, her self-described “moody little record” that introduced a singular new voice and grew into a global phenomenon, sweeping the 2003 Grammy Awards and signaling a paradigm shift away from the prevailing synthetic pop music of the time. Come Away With Me has just become the 10th best-selling album of the Soundscan era and has sold 25 million copies worldwide.

Features:
• Hybrid SACD
• Re-mastered from the original source by Kevin Gray at Cohearant Audio
• Original artwork and booklets
• Playable on ALL CD players