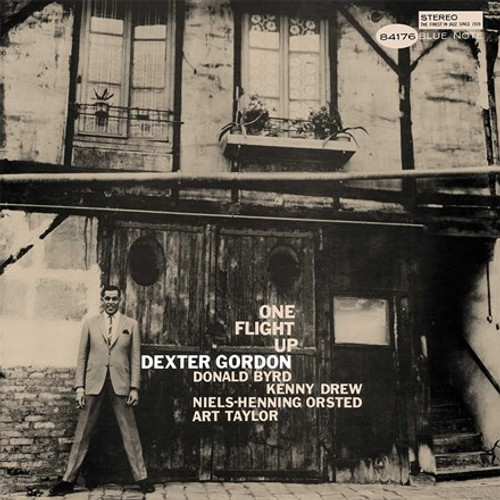 Be alerted when Dexter Gordon - One Flight Up: Blue Note Tone Poet Series (180g Vinyl LP) * * * is back in stock

Dexter Gordon had been living in Europe for several years when he recorded One Flight Up, one of his acknowledged masterpiece albums, in Paris in June of 1964. It's all here: Dexter's magnificently huge sound, Donald Byrd in peak form on trumpet, the subtle sophistication of pianist Kenny Drew, the utter brilliance of the then-teenaged bass phenom Niels-Henning Orsted Pederson, and the rock-steady swing of drummer Art Taylor. The opening track "Tanya" takes up the entire first side of this album at 18+ minutes, and it is a performance for the ages.

Blue Note Records' acclaimed Tone Poet Audiophile Vinyl Reissue Series continues in 2021. Launched in 2019 in honor of the label's 80th Anniversary, the Tone Poet series is produced by Joe Harley (from Music Matters) and features all-analog, 180g audiophile vinyl reissues that are mastered from the original master tapes by Kevin Gray of Cohearent Audio. Tone Poet vinyl is manufactured at RTI in Camarillo, CA, and packaged in deluxe Stoughton Printing "Old Style" gatefold Tip-On jackets. The titles were once again handpicked by Harley and cover the crème de la crème of the Blue Note catalog along with underrated classics, modern era standouts, and albums from other labels under the Blue Note umbrella including Pacific Jazz and United Artists Records. Every aspect of these Blue Note/Tone Poet releases is done to the highest-possible standard. It means that you will never find a superior version.