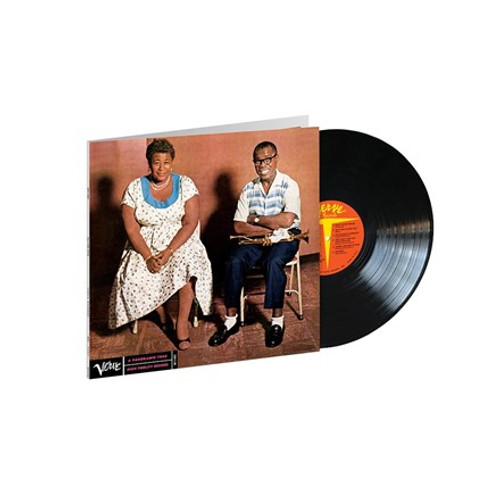 All-Analog 180g Vinyl LP of Ella and Louis Remastered from the Original Analog Tapes, Pressed at QRP, and Housed in Stoughton Gatefold Jacket

The old adage that opposites attract couldn't be more apt in the case of Ella Fitzgerald and Louis Armstrong, whose album collaborations for Verve Records, in the late 50s, resulted in some of jazz's finest and most memorable duets. Texturally, their voices were like satin and sackcloth – Ella's was refined and caressed the ear with its super-smooth contours; Louis' was a rough, gravelly, bark-cum-rasp that was almost rustic by comparison. In sonic terms, then, Ella and Louis juxtaposed in a way that could safely be described as beauty meeting the beast, and yet the contrast in their vocal timbres resulted in a musical chemistry that made their recordings compelling and unforgettable.

The pair would record a handful of singles together from the late '40s to the early '50s but it wasn't until 1956, when producer and jazz impresario Norman Granz put the pair in the studio for an album project, that their potential as collaborators was fully realized. Their inaugural album recording session together was captured for Verve on August 16, 1956, the day after Ella and Louis had performed at one of Granz's most memorable JATP concerts, at the Hollywood Bowl. Evidently, Ella had a soft spot for Louis and was a fan from way back and wanted to make sure that the jazz veteran felt at home and wasn't taken out of his comfort zone. According to Granz, she deferred to Armstrong on all aspects of the record and was just pleased to be in the studio with her idol: "When she made the album with Louis, she insisted that he select the tunes, and she sang them all in his keys, even if they were the wrong keys for her."

Backed by the super-slick Oscar Peterson trio – the duo excelled, with Fitzgerald seemingly unaffected by singing in Armstrong's keys and Satchmo acquitting himself superbly on material that he wasn't familiar with. The first album came out as Ella And Louis, in November 1956, and with its impeccably delivered blend of showtunes and standards, quickly won acclaim and became a bestseller.

This all-analog 180g vinyl LP reissue was mastered from the original analog tapes by Ryan K. Smith at Sterling Sound, pressed at QRP, and comes housed in a Stoughton tip-on gatefold jacket.