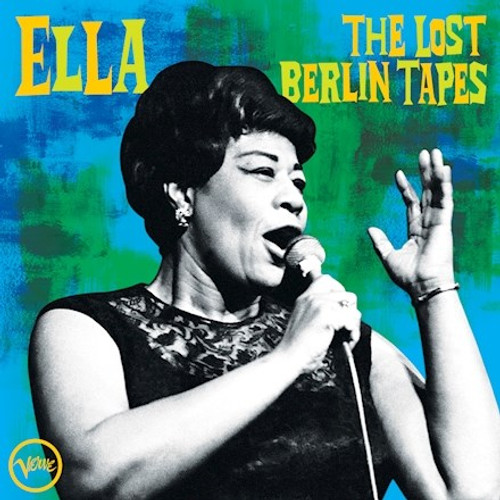 Be alerted when Ella Fitzgerald - Ella: The Lost Berlin Tapes (Vinyl 2LP) is back in stock

Undiscovered 1962 Recording Captures the First Lady of Song Back in Berlin, Home of Her Most Legendary Concerts!

A newly-discovered recording from 1962 captures Ella Fitzgerald at the height of her career, performing for a spellbound audience at Berlin's Sportpalast. The complete concert, dubbed The Lost Berlin Tapes, takes place on the evening of March 25, 1962. Accompanied by pianist Paul Smith, bassist Wilfred Middlebrooks, and drummer Stan Levey, Fitzgerald is at the top of her game – singing a variety of hits, in addition to lesser-known gems. Her longtime manager, Verve founder Norman Granz, regularly recorded her concerts for later release, radio broadcast, or, in the case of this performance, just to keep on hand.

Just two years prior, the First Lady of Song had performed an iconic set at the city's Deutschlandhalle – the recording of which would become one of her best-selling records, Mack The Knife: Ella in Berlin. The album not only garnered Fitzgerald two Grammy Awards but it would later be inducted into the Grammy Hall of Fame. In that 1960 set, Fitzgerald famously flubbed the lyrics to "Mack The Knife." In this performance – captured during the most extensive European tour of her career at the time – she nails them. But she forgets the name of the city she's in. On the recording, she charmingly says, "Ladies and gentlemen, I'm so embarrassed. This is where the first time I sang ‘Mack the Knife' and when I got to the part of the town, I couldn't think of it!" The audience is enthralled, nonetheless.

The singer's unique charm and energy are palpable throughout The Lost Berlin Tapes. She opens with "Cheek To Cheek," followed by the rare "He's My Kind of Boy." After her behind-the-shoulder scat-heavy salute with "Jersey Bounce," Fitzgerald shifts to a heart-wrenching ballad from the Great American Songbook, "Angel Eyes." She also sings the Ray Charles hit "Hallelujah, I Love Him So," singing a reprise that shows her sharp improvisational skills.

"Norman [Granz] had left Verve by the time this was recorded," explains Ken Druker, who produced The Lost Berlin Tapes for release. "But Ella was still under contract to Verve. So he couldn't have released it himself. It was something he knew he couldn't do anything with, contractually...We've all heard a lot of live Ella from this period. We have 1960 from Berlin, and we've also released Ella Returns to Berlin from ‘61. I don't know what it is about Berlin in particular, but she's in great voice, and the band sounds amazing. It's an incredibly strong performance."