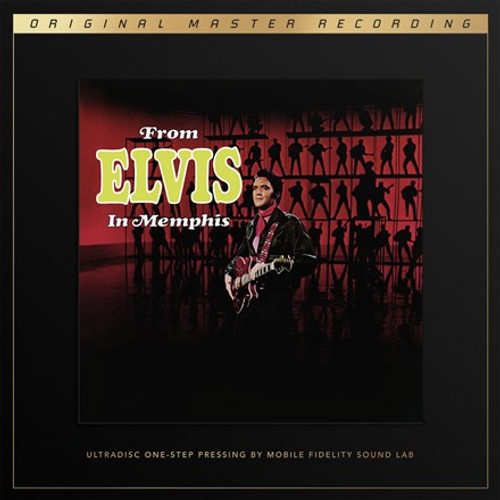 From Elvis in Memphis retains the distinction of being the most cohesive, passionate, mature, and emotionally invested record Elvis Presley ever made. Named one of the 500 Greatest Albums of All Time by Rolling Stone, the white-soul landmark features backing by "The "Memphis Boys" and teems with rhythm-heavy country, gospel, R&B, and blues. Lauded for its natural, open sonics, the 1969 set now comes across with remarkable clarity, presence, and warmth courtesy of a premium restoration befitting a king.

Mastered from the original master tapes, pressed on MoFi SuperVinyl at RTI, and strictly limited to 10,000 numbered copies, Mobile Fidelity's UltraDisc One-Step 180g 45RPM 2LP box set of From Elvis in Memphis unearths the ravishing inner detail, sticky rhythms, and brilliant arrangements of Chips Moman's inspired production. In short, this unparalleled reissue unlocks the spirit and gestalt of the recording and takes you inside American Sound Studio. It also brings you up close and personal with Presley's singing – widely considered by many to represent the finest of his career – located dead-center amidst the instrumental hurricane. Equally impressive are the contributions of the aforementioned Boys, and how their Southern-brewed playing – a balance of leisure with swiftness, grandiosity with concision, freedom with control – dovetails with Presley's vernacular.

The lavish packaging and gorgeous presentation of the UD1S From Elvis in Memphis pressing befit its extremely select status. Housed in a deluxe box, it features special foil-stamped jackets and faithful-to-the-original graphics that illuminate the splendor of the recording. This UD1S reissue exists as a curatorial artifact meant to be preserved, pored over, touched, and examined. It is made for discerning listeners who prize sound quality and production, and who desire to fully immerse themselves in everything involved with the album, from the images to the finishes.

Sharing much in common with the full, rich, orchestrated Stax Records sound, From Elvis in Memphis oozes with choice nuances and distinctive flourishes that on this ultra-hi-fi edition not only arise with previously unheard transparency and sharpness, but complement and serve the whole. Take the specific tonalities and blending of violas, cellos, and horns that communicate mood and serve as counterpoints. Or lively performances of the backing quintet, and how the piano and Hammond organ trace the lines of the melodies and Presley's lead. Listen to the uplifting support provided by the cadre of backing vocalists (more than a dozen credited), unrivaled in Presley's canon and a precursor to the approach he'd soon adopt in Las Vegas.

Of course, From Elvis in Memphis precedes the icon's transition into his glitzy jumpsuit phase – and follows his move away from the hoary soundtrack work that consumed nearly a decade of his creative life and prompted a rebirth that began in 1968. As the bridge between eras, the record seizes on Presley's rejuvenated attitude and commitment to quality, facets that drip from the fervency with which he delivers every word. For the same reasons, and for the fact it traces back to Presley's original roots and hip-shaking guise, the album further remains a cornerstone of American music history.

Writing about the work's 40th anniversary for Rolling Stone, James Hunter correctly observed: "From Elvis in Memphis represented the full-on immersion in the Memphis idea of Elvis Presley, the American singer second only to Frank Sinatra for the ability to conjure a particular sonic universe with his merest vocal utterance. And from the album's first song, in which a bluesy Elvis espies a woman ‘Wearin' That Loved On Look,' to its last, in which a more straight-up-pop Elvis regrets the injustices of life ‘In the Ghetto,' his fully engaged, newly energized voice finds its most logical album setting in years."

Incredibly, Presley and company completed more than two dozen cuts for From Elvis in Memphis. One, "Suspicious Minds," turned into the vocalist's final chart-topping single and lingers as one of his most beloved rock n' roll numbers. Even though it never formally appeared on the record, the non-album song is included here as a bonus track and attains newfound depth, energy, and swagger. Coupled with the other dozen tracks – including the sultry "Power of My Love," balladic take of Dallas Frazier's "True Love Travels on a Gravel Road," and driving cover of Hank Snow's I'm Moving On" – it makes for one of the finest Elvis listening experience available.