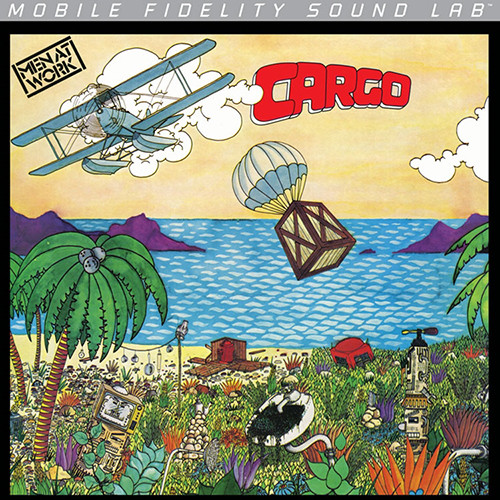 A New-Wave Touchstone: 1983 Sophomore Album Picks Up on Momentum of Band’s Debut

Men at Work already had an album in the Top Ten when the Australian ensemble released Cargo, which continued the momentum gained by its record-setting debut. As ambitious and even more diversified than its initial salvo, the 1983 effort firmly established the band as new-wave pioneers—a group whose goofy playfulness, sharp hooks, brass accents, and memorable choruses helped define the decade’s landscape. Any doubts about Men At Work’s quirky sensibility were promptly answered by the iconic cover art gracing this multi-platinum set.

Mastered on Mobile Fidelity’s world-renowned mastering system and pressed at RTI, this LP not only brings the artwork back into full-scale glory but also takes the enjoyably melodic pop-rock to new sonic heights courtesy of improved imaging, separation, and balance. Previously obscured details jump to the surface, and leader Colin Hay’s unique voice takes on life-like dimensions that hover between the speakers.

While remaining true to the approach that garnered them a Grammy Award for Best New Artist, Men at Work expands the creative palette on Cargo by giving guitars a more prominent role and increasing the rhythmic textures. With the sweeping ballad “Overkill” and politically savvy cynicism of “It’s a Mistake,” the band furthered their radio domination and extended their run of Top 10 singles. A third hit, “Dr. Heckyll and Mr. Jive,” cracked the Top 30. Well-tailored melodies and whimsical imagination definitely had a place in the public’s consciousness, and no group understood this more.

As the final album captured by the original lineup, Cargo remains an indelible piece of the 1980s audio terrain and a reminder of the era’s endless fun. Bolstered by lively saxophone solos, self-effacing humor, and instantly catchy refrains, the album is as good as excuse as any to turn on the stereo, sit down, forget your worries, and dance to leisurely pursuits so perfectly captured by this beloved group.

1. Dr. Heckyll and Mr. Jive
2. Overkill
3. Settle Down My Boy
4. Upstairs In My House
5. No Sign of Yesterday
6. It’s a Mistake
7. High Wire
8. Blue for You
9. I Like To
10. No Restrictions
Related Videos
Review: MoFi Electronics' Turntable Trio - UltraDeck, StudioDeck and Foundation
How We Pack Your Records At Music Direct
Customers Also Bought