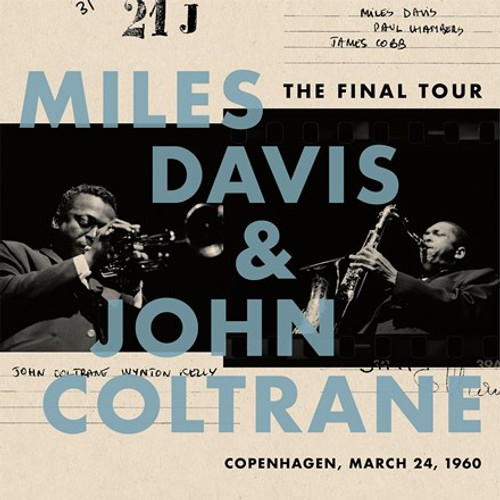 Be alerted when Miles Davis and John Coltrane - The Final Tour: Copenhagen, March 24, 1960 (Vinyl LP) is back in stock

Latest Entry in the Miles Davis Bootleg Series Focuses on the Final Chapter in the Landmark Collaboration Between Davis and John Coltrane: Their Last live Performances Together!

Miles Davis and John Coltrane first collaborated in 1955, when Davis recruited the tenor saxophonist alongside pianist Red Garland, bassist Paul Chambers and drummer Philly Joe Jones. This "first great quintet" debuted on record with ‘Round About Midnight, Miles' first album for Columbia Records in 1957. These early recordings showcased the stunning contrasts between Miles' spacious, melodic lines and Trane's cascading high-energy solos, famously described by the critic Ira Gilter in 1958 as "sheets of sound."

While the quintet disbanded shortly after the release of ‘Round About Midnight, Coltrane was back in Miles' ensemble in early 1958. A year later, the Miles Davis Sextet (Davis, Coltrane, Chambers, saxophonist Julian "Cannonball" Adderley, pianist Bill Evans and drummer Jimmy Cobb) recorded the historic Kind Of Blue, the best-selling jazz album of all time. That same year, Coltrane built upon the modal jazz ideas of Kind Of Blue (based on scales or "modes" instead of chords) on his fifth studio album Giant Steps, released by Atlantic Records in 1960.

Giant Steps established Coltrane as one of the most innovative bandleaders of the genre, and it became clear that his rising star would take him in a different direction than Davis. Even so, Miles could not immediately find a suitable replacement for a Jazz At The Philharmonic tour of Europe organized by jazz impresario Norman Granz, and persuaded his bandmate to join him one last time. It was Trane's first trip to the continent, and his intense, exploratory playing often baffled audiences (who responded vocally).

Nonetheless, these early performances from that European tour – Miles and Trane's last outing together before Coltrane passed away in 1967 – showcased both musicians' incredible influence on the changing sound of jazz. The beautiful music they made together at Copenhagen's Tivolis Koncertsal on March 24, 1960 is presented here for the first time from the original ¼" analog tapes recorded by national broadcasters in Sweden.