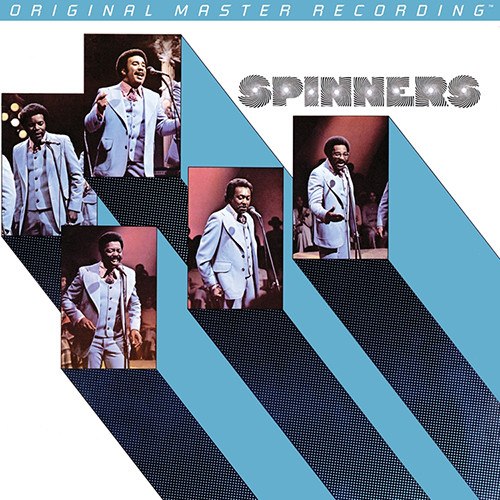 Spinners' Silky Smooth 1972 Self-Titled Record Birthed the Philadelphia Soul Sound: Includes Top 5 Hits "I'll Be Around" and "Could It Be I'm Falling In Love"

The timeless music and expert arrangements are about the only things smoother than the powder-blue suits sported by the Spinners on the cover of their resplendent self-titled 1972 record. The band's first album for Atlantic after departing Motown, Spinners ranks as an all-time soul classic – a filler-free set boasting immaculate harmonies, sweet melodies, and impeccably matched vocals. Thom Bell's flawless production puts it all over the top. Yielding an ideal balance of lushness and grit, the collaboration between the Detroit-based group and studio veteran yielded a record that birthed the celebrated Philadelphia Sound. Now, you can finally experience it in audiophile-grade sonics.

Mastered from the original tapes and pressed at RTI, Mobile Fidelity's numbered-edition 180g LP of Spinners presents the quintet's magnum opus with pristine detail, soothing warmth, and involving emotionalism. Free of previously constraining ceilings, highs soar to their intended heights. Each singer's voice can be distinctly heard amidst the expert mix. Superb dynamics, soundstaging, and imaging highlight Bell's gorgeous orchestrations as well as the Spinners' pillow-soft mellifluousness. Backing instrumentation, ranging from rolling bass lines and punctual horns to swaying strings and crisp high-hat beats, unfolds with reference-caliber purity and transparency. Not many 1970s albums of any genre sound silkier, creamier, or more tonally rich than this LP.

While the career-defining performances within the grooves cannot be overlooked, Spinners remains equally notable for its historical importance. At the dawn of the 70s, Motown still held sway as the dominant soul style. Yet the Spinners' decision to move to Atlantic – prompted by a suggestion by Aretha Franklin – and refashion their approach with Bell signaled a sea change that ushered in a smoother, sweeter variety of R&B punctuated with sweeping strings, jazzy flourishes, brassy replies, and funk rhythms. Few, if any, vocal groups mesh these traits more convincingly, pleasingly, and naturally than the Spinners on this watershed effort.

Anchored by Top 5 smashes like "Could It Be I'm Falling In Love," Spinners signaled the beginning of a partnership with Bell that lasted seven years and elevated the band to stardom. Indeed, even in spite of the four hit singles, the record remains defined by an artistic consistency, watertight focus, and collective unity that make everything here deserving of close attention. Flush with catchy hooks and pop accents, each song is treated as a potential anthem. Laden with depth and richness, Bell's savvy, wide-open arrangements frame the Spinners' satiny singing with sensual class and refined delicacy.

Heaven-sent voices do the rest. Making his first appearance on record as a member, Philippe Wynne treats the carefully honed material as a breakout session for his dulcet tenor on tracks such as "One of a Kind (Love Affair)." Not to be outdone, the equally measured Bobbie Smith mesmerizes with his deft phrasing, reedy timbre, and sparkling clarity, never finer than on the million-selling "I'll Be Around." Solo or paired together, Wynne and Smith's glorious leads run the gamut from upbeat and optimistic to sad and forlorn, forming the backbone of a masterwork that addresses romance ("Just You and Me Baby"), regret ("How Could I Let You Get Away"), and social ills ("Ghetto Child") with consummate passion.

1. Just Can’t Get You Out of My Mind
2. Just You and Me Baby
3. Don’t Let the Green Grass Fool You
4. I Could Never (Repay Your Love)
5. I’ll Be Around
6. One of a Kind (Love Affair)
7. We Belong Together
8. Ghetto Child
9. How Could I Let You Get Away
10. Could It Be I’m Falling In Love
Related Videos
Review: MoFi Electronics' Turntable Trio - UltraDeck, StudioDeck and Foundation
How We Pack Your Records At Music Direct
Customers Also Bought