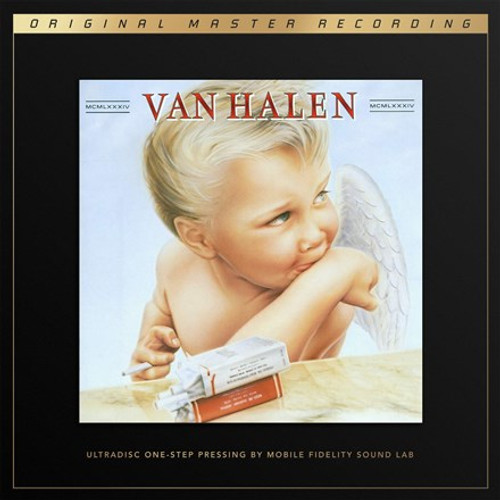 Mastering Source to Be Determined Closer to Production Date; Specifics Will Be Posted Here When Authenticated

Less than six years after changing the music landscape with its self-titled debut, Van Halen repeated the enormous feat. Certified 10-times-platinum by RIAA, graced by three immensely popular singles, and adorned with iconic artwork, 1984 witnesses the band expanding the synthesizer elements introduced on several prior albums and seamlessly bridging pop and metal sensibilities into a cohesive melodic whole. Punchy and catchy, glamorous and glitzy, blustery and heavy, wild and pyrotechnic, fast and fun, 1984 is David Lee Roth, Eddie Van Halen, Michael Anthony, and Alex Van Halen hitting on all cylinders. Do not wait to get this landmark on Mobile Fidelity's UltraDisc One-Step 180g 45RPM 2LP box set, mastered from the original master tapes and pressed on MoFi SuperVinyl.