Equipment Speakers
Price Now $998.00
Was
Was
Save $0.00 (0%)
Questions and Answers
Availability: In Stock
This item is in stock and ready to ship. Depending on the time of day when you place your order, it will ship same day or next business day. 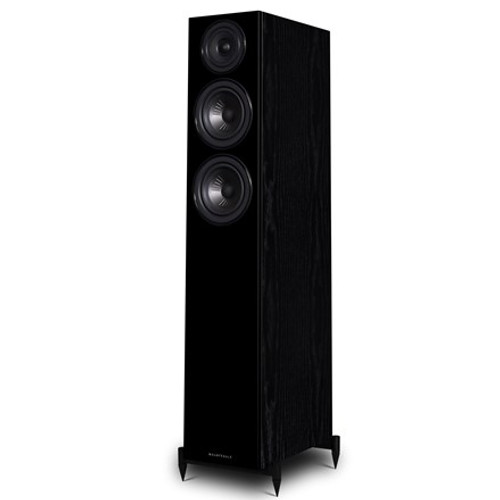 Be alerted when Wharfedale - Diamond 12.3 Tower Speakers (Pair) is back in stock

"New." If you were to describe the Wharfedale Diamond 12.3 tower loudspeaker with one term, you'd be challenged to pick a different word. That's because like all Diamond 12 models, the overachieving floorstander arrives having been re-engineered top-to-bottom over its predecessor to ensure its status as a budget benchmarks its price class. Everything from the drivers to the crossovers to the cabinets contributes to an instrument that reproduces music exceptional poise, detail, openness, and emotionalism. Equally important, Diamond 12.3 is at home with all types of recordings, from pop and rock to jazz and classical.

Of course, Diamond 12.3 isn't a 2.5-way design for nothing. It boasts a five-inch midrange and five-inch woofer – each comprised of trademarked Klarity cone material – formulated from a blend of polypropylene and mica to add stiffness while remaining lightweight for low coloration and fast responsiveness. Fitted with a low-damping surround and shaped to achieve a flat response curve, both produce expressive dynamics even on complex material. Each also touts a precision-crafted magnet system with an aluminum compensation ring to minimize the effect of variations in inductance as the voice coil travels, ultimately leading to an absence of distortion and intermodulation generated by the motor system. As for the aforementioned voice coil? It's wound on an epoxy/glass-fiber bobbin produces higher power handling than those assembled on aluminum machines – and claims a stiffness lacking on Kapton types normally found on speakers at this cost.

Visually, Diamond 12.3 will make you beam with pride once you see it in your room. Showcasing elegant finishes and accents, it takes advantage of form-follows-function architecture in which Intelligent Spot Bracing connects opposite walls with a custom, computer-modeled wood brace to reduce resonance – and not transfer it from side to another. In addition, the rear-ported enclosure works in harmony with the drive unit to produce the focused sound you deserve to hear.

Let's review: Advanced construction, premium parts, playback that draws you in and turns you into an active participant, and a cost that leaves plenty left over for records. Diamond 12.3 is built and shaped to cut right to the soul of your music. 100% Music Direct Guaranteed.

"They're smooth, even-handed and wonderfully refined for the money.... It's tough to make a truly talented affordable floorstander, but Wharfedale has cracked it with the 12.3. They are terrifically accomplished for the money and good enough to claim a space in the Diamond's hall of fame. Don't buy another tower at this level without hearing this one first."
—What Hi-Fi?, five-star review, 2022 Product of the Year Winner: Best Floorstanding Speaker