Equipment Amplification Integrated Amp
Price Now $8,995.00
Was
Was
Save $0.00 (0%)
Questions and Answers
Availability: In Stock
This item is in stock and ready to ship. Depending on the time of day when you place your order, it will ship same day or next business day. 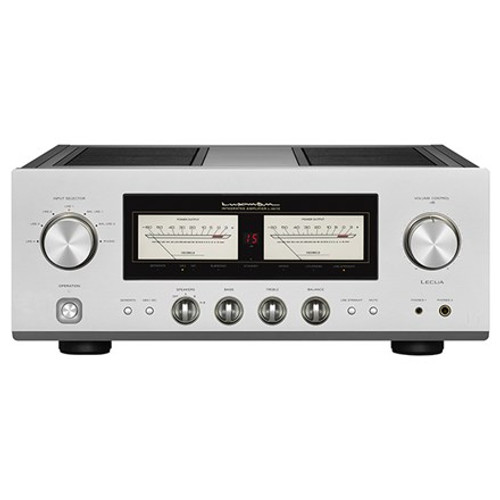 Luxman has seen the future of amplification and it starts with L-507Z: an integrated amplifier that offers 110 watts per channel. It features the Japanese company's new LIFES feedback circuitry, which enables stellar dynamics and reduces distortion in the amplification stage to a level that's less than half that of the previous (and acclaimed) ODNF system. A new, electronically controlled LECUA1000 attenuator is incorporated into the amplifier circuit to further minimize sonic degradation. Beautiful analog VU meters inject a dose of old-school charm into this agile trailblazer.

Under the hood, the newly designed LIFES distortion-canceling feedback engine is crucial to this integrated amp's spectacular performance. LIFES is a significant evolution from ODNF circuitry, which has been a key advantage of Luxman amplifiers since its 2010 introduction in the X-series. The robust L-507Z marks the beginning of Z-Series components, all of which will include the LIFES amplification system, a core technology also shared with the flagship M-10x stereo/mono power amplifier.

The L-507Z has additional new features that enhance both convenience and performance. Updated front-panel VU meters combine with a seven-segment LED display to improve visibility of volume levels from any listening position. For aesthetic impact, the level meter back-lighting and LED display can be turned on and off via the remote control.

The LECUA1000—an 88-step, electronically controlled attenuator—is integrated into the amplifier circuit, minimizing sonic degradation over the full range of volume. The output section of the preamplifier is equipped with discrete buffer circuitry that authoritatively drives the subsequent power-amplifier stage.

The L-507Z offers a variety of functions for tremendous flexibility, such as the built-in, newly developed MM/MC compatible phono amplifier circuit that supports high-quality analog playback. Sensitive tone controls, L balance control, and a loudness function make it very easy to adjust the sound quality. The Separate function uncouples the pre and power amplification system, and a new mute button has been added to the front panel.

The L-507Z comes with an aluminum alloy remote control (which can also operate compatible Luxman CD players). Like all Music Direct products, it comes with the 100% Music Direct Satisfaction Guarantee.

The cast-iron feet protect delicate music signals from unwanted vibrations, thanks to the design's density gradient, gradually decreasing from the center to the periphery, which makes resonance less likely to occur.

LIFES is based on the technical concept of Luxman's ODNF circuit and realizes excellent, dynamic characteristics without feeding back any of the original audio input signal to the main amplifier, achieving remarkably natural sound. The design has been conceived and expanded upon using simulation technology and painstaking research. By repeatedly auditioning, rigorously scrutinizing, and combining specially selected components, the engineering team at Luxman has achieved supreme performance characteristics.

In producing LIFES version 1.0, by carefully reimagining the entire circuit, Luxman succeeded in reducing the number of paralleled elements while improving performance. The distortion in the amplification stage has been reduced to less than half that of the previous system. The output stage features a three-stage Darlington triple-paralleled push-pull configuration and achieves a class AB power output of 110W+110W (8Ω) and 210W+210W (4Ω). The high output power, comparable to that of a separate power amplifier, creates a natural soundstage, full of energy, to confidently drive any compatible loudspeaker system.