Equipment Speakers
Price Now $639.00
Was $1,298.00
Was
Save $659.00 (51%)
Questions and Answers
Condition: Open Box
Availability: In Stock
This item is in stock and ready to ship. Depending on the time of day when you place your order, it will ship same day or next business day. 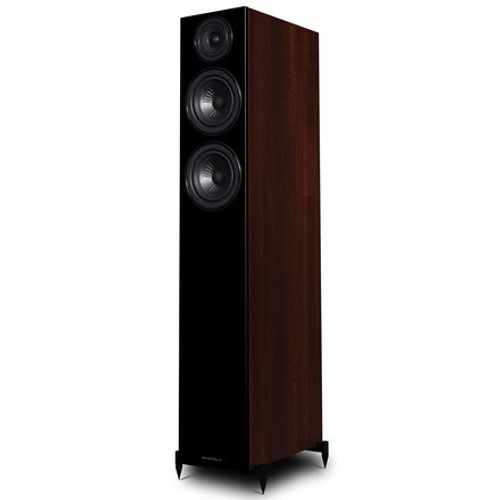 Be alerted when Wharfedale - Diamond 12.4 Tower Speakers (Walnut, Pair) **OPEN BOX** is back in stock

Fueled by a 6.5-inch woofer and 6.5-inch bass/midrange driver, the Wharfedale Diamond 12.4 tower loudspeaker plays with a focus, immediacy, transparency, and openness mostly off-limits to other models anywhere near its price class. Proudly expanding on the Diamond Series heritage originally established more than three decades ago, Wharfedale thoughtfully considered every aspect of Diamond 12 Series and updated practically everything from the ground up on both the inside and outside so that each speaker in the line performs with optimal results. A sophisticated voice coil, precision-based parts, and computer-modeled bracing are just a few of the audiophile-minded advantages that yield natural, richly expressive sound.

Responsible for its fantastic low-end capabilities, Diamond 12.4 features advanced drivers comprised of trademarked Klarity cone material – formulated from a blend of polypropylene and mica to add stiffness while remaining lightweight for low coloration and fast responsiveness. Fitted with a low-damping surround and shaped to achieve a flat response curve, it produces expressive dynamics even on complex material. Each driver also possesses a precision-crafted magnet system with an aluminum compensation ring to minimize the effect of variations in inductance as the voice coil travels, ultimately leading to an absence of distortion and intermodulation generated by the motor system. As for the aforementioned voice coil, it comes wound on an epoxy/glass-fiber bobbin produces higher power handling than those assembled on aluminum machines – and claims a stiffness lacking on Kapton types normally found on speakers at this price level.

When it comes to highs, Diamond 12.4 will take you there. Comprised of woven polyester film with a high-loss coating for open, smoothly extended high frequencies, its one-inch soft-dome tweeter boasts an optimized magnet system and flat front plate to attain wide dispersion and uncompressed playback. Architecturally, a very short duct on the front plate balances the acoustic load and serves to improve SPL measurement. Equally important, Diamond 12.4 utilizes a sophisticated crossover network with LKR 24dB topology and air-core inductors – the latter commonly found in much more expensive high-end designs due to their low-distortion properties.

Sporting a fit and finish intended to instill pride of ownership, Diamond 12.4 takes the elegance of its namesake stone with utmost seriousness. It also benefits form-follows-function architecture in which Intelligent Spot Bracing connects opposite walls with a custom, computer-modeled wood brace to reduce resonance – and not transfer it from side to another. In addition, the rear-ported enclosure works in harmony with the drive unit to produce the sound you deserve to hear.

As the flagship in a series that has literally redefined what's possible from budget-friendly speakers for more than 30 years, Diamond 12.4 will make you a believer in high-end audio and the differences it makes on how – and what – you hear. 100% Music Direct Guaranteed.