Equipment Accessories
Price Now $5,650.00
Was
Was
Save $0.00 (0%)
Questions and Answers
Availability: In Stock
This item is in stock and ready to ship. Depending on the time of day when you place your order, it will ship same day or next business day. 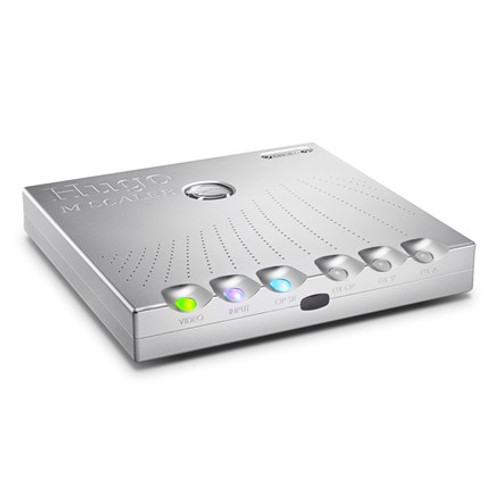 The world's most cutting-edge digital filter resides inside The Absolute Sound Product of the Year and Golden Ear Award-winning Chord Electronics Hugo M Scaler, a tabletop upscaling device that revolutionizes the sound of digital music. Able to upscale 44.1kHz up to 705.6kHz – 16 times that the native resolution of CD – with most DACs, it takes such monumental technical capability up to 768kHz with Chord Electronics' dual-BNC-input Qutest and Hugo TT 2 models. FPGA-based WTA filtering technology, fascia-mounted controls, an adjustable sample-rate output, and a spate of inputs and outputs further allow the British-built Hugo M to stand alone in the field. Chord Electronics' three-year warranty and Music Direct's 100% Satisfaction Guarantee pile on the spoils of a component without equal.

"It replaces the various reconstruction filters used in other manufacturers' DACs with Rob Watts's enormously long WTA filter. That filter does sound superb, and, as a bonus – in addition to upgrading the sound of older DACs – the M Scaler adds a USB input with Roon compatibility to older DACs that don't have one, like my expensive Levinson."
— John Atkinson, Stereophile

Compact Form Factor, Modernized User Interface
Hugo M's compact form factor aligns with Chord Electronics' TT (tabletop) series and has been designed to be stackable with other units in the range, including the the Hugo TT 2, to form a highly advanced yet space-saving system. In line with other models in the Hugo and Hugo TT series, the device features a number of illuminable fascia-mounted spherical controls, governing input selection, output sample rate and video mode for lower latency. The control spheres display data visually including input source and the incoming sample rate, using a polychromatic scale.