Equipment Amplification Headphone Amp
Price Now $3,299.00
Was
Was
Save $0.00 (0%)
This product is not eligible for further discounts.
Questions and Answers
Availability: In Stock
This item is in stock and ready to ship. Depending on the time of day when you place your order, it will ship same day or next business day. 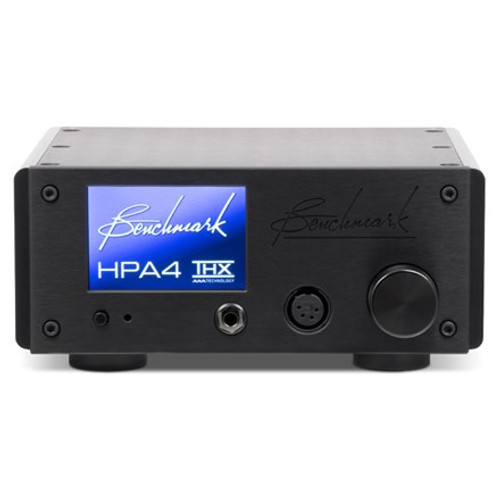 The world's most linear headphone amplifier: That's the all-analog Benchmark HPA4 line preamplifier in a nutshell, the result of patented feed-forward topology that nulls conventional distortion and noise – in addition to featuring THX AAA (Achromatic Audio Amplifier) technology that reduces harmonic, intermodulation, and crossover distortion by 20 to 40dB. This U.S.A.-tested and -built component exemplifies power, speed, fidelity, and accuracy – and dead-silent backgrounds that will allow you to hear the pristine nuances, tonal textures, sustained notes, and wide-ranging dynamics that make music truly come alive. Its precision and silent operation are simply off the charts.

We seriously cannot say enough about the sound, quality, features, and uniqueness of HPA4. Our 100% Music Direct Satisfaction Guarantee ensures you'll experience headphone listening like never before – and become transported to places where it's only you and your favorite artists. Contact us today to schedule a risk-free home audition with this reference headphone amplifier that is genuinely a benchmark performer.

"Benchmark calls the HPA4 a 'reference stereo headphone amplifier and reference line amplifier,' and I found no reason to dispute this. It performed at reference level with whatever I threw at it. It is ergonomically elegant with a well-laid-out remote and front panel controls. Also, its headphone amplifier was able to support a wide variety of headphones and is the first component to utilize THX Achromatic Audio Amplifier (AAA) technology."
—Steven Stone, Home Theater Review

"[It is] exceptionally good at presenting a layered, dynamic, yet relaxed sound."
—The Absolute Sound, Editors' Choice and Product of the Year Awards

"This sounds like audio nerdiness, but the payoff is that music sounds more alive so that you spend less time thinking about the sound and more time playing air guitar."
—Tom Martin, The Absolute Sound

All-Analog Signal Path, Incredible Speed and Precision
HPA4 is 100% analog and designed to be driven from an external D/A converter or an external analog source. It eclipses the performance of typical high-end preamplifiers by achieving much lower noise and distortion. The bandwidth of HPA4 extends from 0.01Hz to more than 500kHz. This means HPA4 delivers very precise amplitude and phase accuracy over the entire audio bandwidth. Wave shapes are accurately reproduced, and the entire spectrum delivered with precise timing. HPA4 produces musical overtones with lifelike accuracy, rendering musical instruments without changing their sonic character.

High Voltage, Current, and Power Plus Built-In Protection Systems
The THX-888 amplifier can cleanly deliver high voltage into low-sensitivity high-impedance headphones and can cleanly deliver high power and current into low-impedance headphones. HPA4 delivers 11.9 Vrms into 300 ohms and six watts into 16 ohms. Given these extreme capabilities, Benchmark has incorporated several protection systems to protect expensive headphones and the amplifier itself. These include DC detection, short-circuit detection, over-current protection, over-voltage protection, and thermal protection.

Wide-Ranging System Integration
HPA4 includes IR remote control and can be operated using the optional Benchmark remote. It is designed to work with the Benchmark DAC2 and DAC3 converters but may be driven from any high-end DAC. When paired with a Benchmark DAC, a single remote control will operate both units. HPA4 makes a perfect complement to the Benchmark AHB2. It may be the only preamplifier or line amplifier that exceeds the signal to noise ratio of the ultra-quiet AHB2. This means HPA4 will extract the full performance of AHB2. In contrast, other preamplifiers limit the system noise performance because they cannot match the SNR performance of AHB2. Two bidirectional 12V trigger ports can be used to link the HPA4 with external DACs and power amplifiers. The trigger signal controls the power-up and power-down sequencing of the entire audio system. The trigger ports are compatible with most industry-standard trigger input or output ports, but can communicate bidirectionally with other Benchmark products.

For Your Convenience
HPA4 includes independent on-screen mute buttons for the headphone and line outputs. Both can also be muted with the volume knob or with the optional remote control. HPA4 also comes with an on-screen -20dB dim button that instantly reduces the level by 20dB, providing a temporary volume reduction and an easy return to the previous listening level. This control makes it easy to transition between a normal listening level and a background level. Dim is also accessible from the optional remote control. Inputs may be renamed and unused inputs may be disabled. And input levels can be trimmed to provide input-to-input level matching. Screen brightness is adjustable and timers can be set to dim or shut off the display. The screen can be locked to prevent access to advanced features.