Equipment Phono Cartridges
Price Now $449.00
Was
Was
Save $0.00 (0%)
Questions and Answers
Availability: In Stock
This item is in stock and ready to ship. Depending on the time of day when you place your order, it will ship same day or next business day. 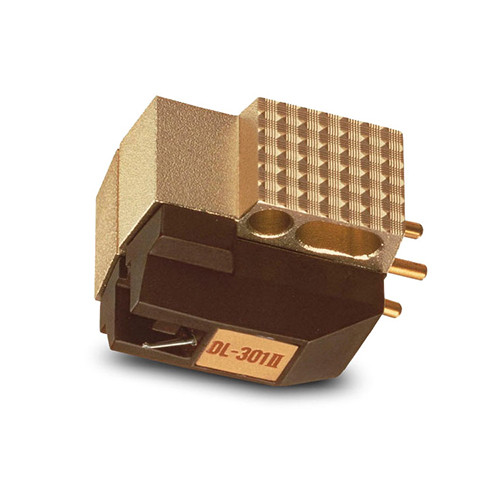 The Denon DL-301 II MC phono cartridge is the updated version of the acclaimed DL-301. The body style has been changed and output performance has been improved to provide a more detail-oriented performance. Its output is slightly higher than that of most moving-coil cartridges, delivering an authoritative response with plenty of punch. DL-301 II is also capable of revealing subtle nuances in recordings, allowing you to hear intricate sonic details that were created in the recording studio or on the concert stage.

Hear for yourself the sound quality that has enabled Denon to transform thousands of casual music fans into loyal, devoted audiophiles around the world.

Since the beginning of the 20th century, Japan has been synonymous with cutting-edge electronics. Denon has been turning innovative ideas into sonic reality for more 110 years. Shaped by an intimate relationship with Japan's national public broadcaster, NHK, the brand spent its early years developing groundbreaking technologies that would reimagine audio paradigms.

Denon quickly established itself as one of the world's most innovative audio brands, frequently first to deliver new technology. Over the decades, it has drawn on its rich history to inform countless new developments. After all, it was the brand's Hi-Fi expertise that enabled Denon to create the first AV Receivers.

Today, from its Audio Works facility in Shirakawa, the brand continues to build on its legacy of technological firsts, exploring new formats, processes, and products.