Equipment Phono Cartridges
Price Now $8,995.00
Was
Was
Save $0.00 (0%)
Questions and Answers
Availability: In Stock
This item is in stock and ready to ship. Depending on the time of day when you place your order, it will ship same day or next business day. 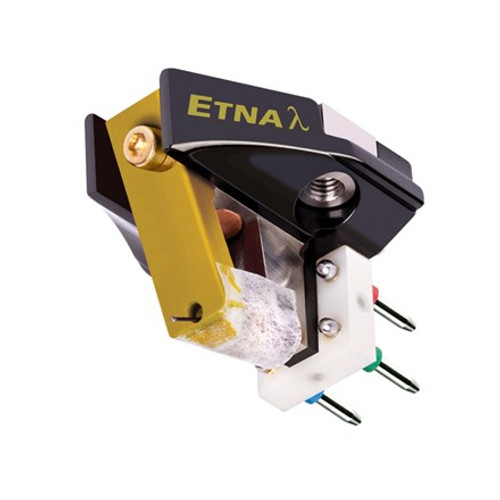 The Stereophile Class A Recommended Lyra Etna Lambda MC phono cartridge is unlike any other analog tool in its class. Combining modern and traditional engineering, it employs unique methodology and construction to remove resonance. Hand-built in Japan, each model is individually tuned for optimal uniformity and goes through multiple levels of inspection before being cleared for use. Yes, it's a big step up in price from most cartridges, but one that yields gains in transparency, the removal of distortion, and remarkable accuracy. In short, the advanced design principles allow the focus to be placed on the music buried in the grooves of your records. Etna Lambda is a prestigious musical instrument and one deserving of the "ultimate" moniker.

We could go on and on about the emotional sound you'll experience, but we'd prefer you let Etna Lambda's blazing speed, superior separation, and on-point accuracy help transform your vinyl LPs into musical events sooner than later.

"The Etna rode silently in the groove, effectively rejecting any defects that normally produce impulse or constant noise. One of the most neutral yet enticing-sounding cartridges I've ever heard, it's also one I can recommend for any system and for any musical taste!"
– Michael Fremer, Stereophile, Class A Recommended Component

Asymmetric Design, X-Shaped Coil Formers for Elite Tracking and Separation
Akin to Atlas Lambda, Etna Lambda utilizes the asymmetric design concept but moves the screw/screwhole all the way to the front of the cartridge and interposes a bronze damping barrier between it and the mechanical path linking the cantilever assembly to the tonearm head shell. Freed of all obstructions and voids, the rigid, direct path established between cantilever and head shell is highly effective at draining away vibrations once they have been converted into electrical signals – effectively suppressing induced resonances and internal reflections that would otherwise manifest as sonic colorations. A narrowed mounting area couples Etna Lambda more tightly to the head shell and facilitates the transfer of vibrational energy into the tonearm, giving even better control over spurious resonances. Etna Lambda also retains the X-shaped coil formers from Atlas Lambda. Compared to traditional square coil formers, the X-shape allows each channel to operate with greater autonomy, increasing tracking consistency and channel matching while also improving channel separation due to the decrease in crosstalk. Lyra's New Angle technology pre-biases the signal coils so they are perfectly aligned to the front and rear magnets during LP playback, which allows the coils to move optimally in all directions for distortion-free performance.

Cantilever Directly Mounted Into Cartridge Body Reduces Information Loss
Etna Lambda uses a yoke-less dual magnet system, diamond-coated boron rod cantilever, and Lyra-designed variable-radius line-contact stylus. Lyra remains the only cartridge manufacturer to mount the cantilever directly into the cartridge body to create a rigid, seamless connection between the cantilever assembly and tonearm head shell. Why? Linear transducers such as phono cartridges are inherently inefficient devices (on the order of 5-10%). In other words, of the vibrational energy that enters a cartridge from the LP groove, only 5-10% will be converted into electrical signal. The cartridge's internal damping system will dissipate some of the remaining 90 to 95%, but much of the excess vibrational energy will reflect inside the cartridge, creating internal echoes and a general diminishing of fidelity. It is quite easy to hear this with many cartridges. Olay a highly modulated LP with the power amp turned off, and bring your ear close to the cartridge. The "needle talk" that you hear is excess vibrational energy which isn't being controlled properly. Etna Lambda's direct-mounted cantilever helps conduct this excess vibrational energy into the head shell, where it is safely dissipated within the greater mass of the tonearm and turntable plinth.

Constrained-Layer Construction Yields Sonic Freedom
Etna Lambda features a center structure made of solid titanium, but unlike Atlas Lambda, its central core is surrounded by an outer body machined from highly polished aircraft-grade aluminum and anodized with a brilliant black finish. The two pieces are press-fitted with resonance control rods and stainless steel screw bushings in a multi-material approach that touts significantly improved rigidity and damping characteristics. The prime advantage of such constrained-layer construction: No single material's sonic signature defines the sound of the cartridge.