Equipment Phono Cartridges
Price Now $239.00
Was
Was
Save $0.00 (0%)
Questions and Answers
Availability: In Stock
This item is in stock and ready to ship. Depending on the time of day when you place your order, it will ship same day or next business day. 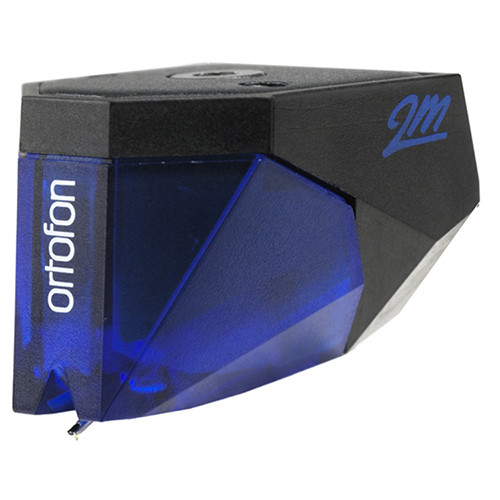 The Stereophile Class C Recommended Ortofon 2M Blue is an upgrade from the Red. The 2M Blue uses the same structures but employs a highly polished nude-elliptical stylus for much better tracking and quieter reproduction, as it reaches deeper into the record’s grooves. The 2M Blue easily outperforms the older, more expensive and very popular OM-30.

The 2M series of cartridges feature Ortofon’s trademark split pole pins, an invention which enables moving magnet cartridges to have flat frequency response, just like a moving coil cartridge.  Ortofon invented the Split pole pin technology and were originally offered in the 500 series and Super OM series. 2M series was developed in conjunction with Danish designer Møller Jensen Design – the same designer who designed the award winning MC Jubilee and very successful Kontrapunkt series.  Inspired by the facets of a diamond, whose contours gracefully trace the grooves on a record’s surface, the 2M’s handsome elegance establishes a great combination of form and functionality.

2M series is designed for precise and accurate retrieval of the information in the record groove. Ortofon's philosophy is to make cartridges which reproduce the record grooves as accurately as possible, without coloring the sound. The 2M series design has been optimized for ease of mounting and their weight and size fit virtually any current turntable.

"It's well-built, easy to install – thanks to its pre-threaded mounts – and, with a healthy output, offers a clear and open presentation with plenty of bite."
—Hi-Fi Choice