Equipment Phono Cartridges
Price Now $85.00
Was $99.99
Was
Save $14.99 (15%)
Questions and Answers
Condition: Open Box
Availability: In Stock
This item is in stock and ready to ship. Depending on the time of day when you place your order, it will ship same day or next business day. 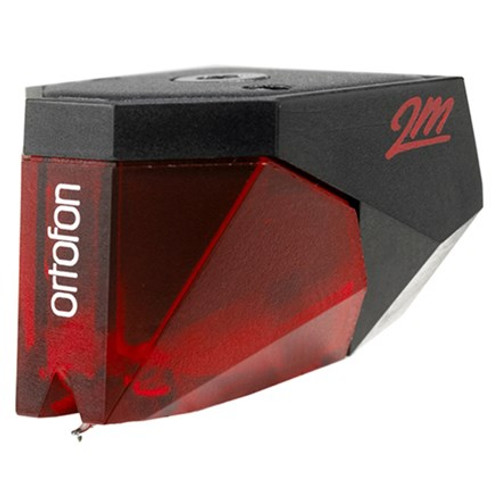 The Absolute Sound Product of the Year Award Winner

The Ortofon 2M Red is an evolution and an update of Ortofon's best-selling OM Series of Moving Magnet cartridges. The 2M body, generator and stylus profile have all been greatly improved and this great budget cartridge integrates 21st century technology in an affordable package.

"The 2M Red is the entry level and 2M Black is the flagship. Their performance is a fitting tribute to Ortofon and chief engineer Per Windfield!"
– Neil Gader, The Absolute Sound

The 2M series of cartridges feature Ortofon's trademark split pole pins, an invention which enables moving magnet cartridges to have flat frequency response, just like a moving coil cartridge. Ortofon invented the Split pole pin technology and were originally offered in the 500 series and Super OM series. The 2M Red uses an improved engine, which provides an increased output of 5.5mV. The 2M Red features a tipped elliptical diamond.

The 2M series was developed in conjunction with Danish designer Møller Jensen Design – the same designer who designed the award winning MC Jubilee and very successful Kontrapunkt series. Inspired by the facets of a diamond, whose contours gracefully trace the grooves on a record's surface, the 2M's handsome elegance establishes a great combination of form and functionality.