Equipment Speakers
Price Now $3,699.00
Was
Was
Save $0.00 (0%)
This product is not eligible for further discounts.
Questions and Answers
Availability: In Stock
This item is in stock and ready to ship. Depending on the time of day when you place your order, it will ship same day or next business day. 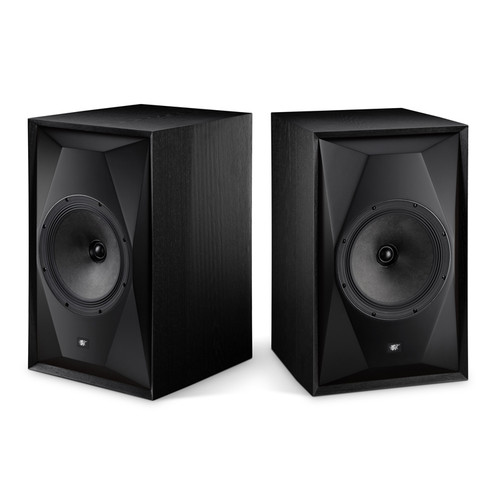 Of the many reasons to invest in a pair of Mobile Fidelity Electronics SourcePoint 10 bookshelf loudspeakers, one stands above all the others: They are the creation of revered engineer Andrew Jones. Responsible for designing many commercially and critically successful loudspeakers of the past several decades, and touting more than 40 years of industry experience — including stints with KEF, Infinity, Pioneer, TAD, and ELAC — MoFi's Chief Loudspeaker Designer crafted the two-way SourcePoint 10 by starting with a blank sheet of paper. Roughly two years later, he arrived at a beautiful standmount that is the best-performing model of his decorated career.

Jones devised SourcePoint 10 to appeal to music lovers of every stripe — and to play every kind of music with an aptitude foreign to most audiophile speakers that traditionally deliver one or two kinds of music with exceptional results but fall flat in other areas. Whether you prefer relaxing or aggressive fare, acoustic or electric material, or listen to a broad scope of eras and artists depending on your mood, SourcePoint 10 conveys it all without prejudice. This is a speaker that conveys recordings in ways that will touch your heart and stir your soul. And because it involved Jones, it comes loaded with technical acumen.

The result of frequent research, testing, and experimentation conducted in Jones' private studio, SourcePoint 10 is configured around a custom-tooled 10-inch concentric driver and a 1.25-inch soft-dome tweeter centered within the woofer cone. As part of this speaker's point-source system, the cone acts as a waveguide for the tweeter to both match directivities and maximize the tweeter efficiency. It also plays with exceptional control, tonal balance, and accurate imaging. Working in absolute synchrony with the tweeter, the 10-inch paper-cone concentric driver keeps displacement to a minimum and helps deliver accurate midranges, taut low-end responsiveness, and powerful dynamics. By using that large of a woofer, Jones kept cone displacement to a minimum — even for challenging low-end information. Not to be overlooked: a corrugated surround that allows for improved linear excursion and minimizes diffraction corruption of the tweeter wave expansion.

Indeed, Jones took every detail into consideration. The "Twin Drive" magnet system for both the tweeter and woofer are designed around high-energy neodymium magnets that, when combined, produce an extremely linear low-distortion drive force and employ copper sleeves to further reduce nonlinear inductance. Jones also chose a two-way crossover with laminated-steel core inductors for its smooth on- and off-axis responsiveness. His crossover frequency and slopes seamlessly blend the woofer to the tweeter to further minimize the audibility of out of band anomalies.

Just as importantly, SourcePoint 10 builds on the confidence and trust Mobile Fidelity first began to establish with its renowned Original Master Recordings more than four decades ago. With SourcePoint 10, Jones — who enjoyed the benefits of working without fixed deadlines and budgetary constraints — carries on the company's mission to create first-rate components that honor Mobile Fidelity's studio heritage and help form a complete source-to-output chain wedded to the prized concepts of signal purity, faithfulness, and precision.

SourcePoint 10 also makes hearing quality high-end audio easier by removing fussiness from the equation. Rated at 91dB sensitivity, the speaker mates with a wide array of amplification sources and boasts a 42Hz-30kHz frequency range. Jones ensured that no matter where it's employed, SourcePoint 10 can be dialed-in with ease to deliver maximum performance in any environment. Complete with removable grilles, the 14.5 x 22.5 x 16.6-inch (HWD) SourcePoint 10 is available without stands or with dedicated stands custom-designed to optimize the speakers' placement and stability.

Contact Music Direct to learn more about Jones' triumphant design — and to arrange a risk-free in-home audition of SourcePoint 10 to hear a pair for yourself.

Made for Each Other: Custom-Tooled Driver and Tweeter

Jones chose the 10-inch diameter as the ideal size for the two-way concentric driver to minimize cone movement and produce deep bass. He and MoFi worked from a paper pulp mix and developed a cone shape that both optimizes resonant behavior and meets the requirements of the tweeter waveguide. Jones opted for paper after evaluating a variety of exotic materials. Paper also has the quintessential combination of properties for the size of the cone he needed. The tweeter is a 1.25-inch soft dome capable of working at the 1.6Khz crossover point due to its wide-roll surround and large-diameter voice coil. The wide surround extends the low- and high-frequency response of the tweeter, while the loading of the waveguide increases the low-end efficiency by a significant margin.

SourcePoint 10 is driven by a magnet system that MoFi calls "Twin-Drive." This important technical achievement helps the speaker play with exceptional clarity. After months of running magnetic field simulations, Jones selected high-flux neodymium magnets for the woofer and tweeter that are precisely coupled to create a compound effect: each aids the other in driving the flux across the woofer and tweeter gaps. The Twin-Drive magnet structure was also built to create a fully symmetrical magnetic field, which eliminates flux modulation for extremely low intermodulation distortion (IMD) and accurate reproduction.