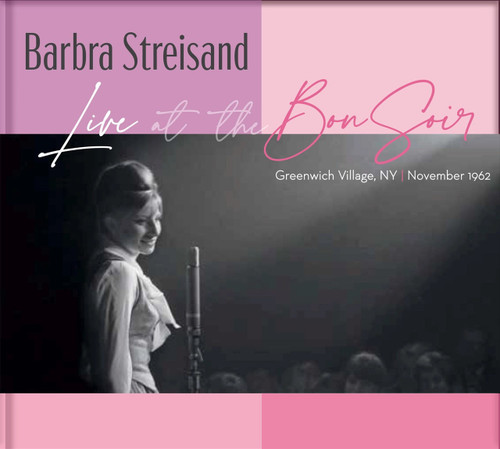 Legendary 1962 Debut Recording Officially Available for the Very First Time Under the Supervision of Barbra Streisand; Mixed by Jochem van der Saag from the Original Analog Session Tapes and Mastered in 24 bit/96 kHz by Paul Blakemore

In the fall of 1960, New York City wasn't the same urban mecca it is today. Neither was eighteen-year old Barbra Streisand, who emerged on the Greenwich Village club scene at a small, cozy venue on West 8th Street called the Bon Soir, where she received rave reviews and wooed the crowd with her incredible performances. Within two years Streisand, whose magnificent interpretations of both standards and quirky, obscure cabaret tunes was a nationwide sensation, was knocking audiences dead with her nightly performance as Miss Marmelstein in David Merrick's I Can Get It For You Wholesale on Broadway.

Sixty years, multiple Grammy, Emmy, Oscar, Tony and Golden Globe awards and nearly two hundred million record sales later, Barbra has for the first time authorized the release of a major portion of her Bon Soir performances, as captured in 1962 by Columbia Records. Impex Records - in conjunction with Sony Music Entertainment - is proud to present the audiophile 180-gram vinyl LP and SACD editions of the most sought-after recordings in Barbra's legendary career: Live at the Bon Soir: Greenwich Village, NY - November 1962. This gorgeous album features twenty-four brilliant performances personally selected by Barbra from the original Bon Soir master tapes and expertly mixed and mastered by Paul Blakemore and Jochem van der Saag, under the supervision of producers Streisand, Martin Erlichman and Jay Landers.

Impex has created two versions of this noteworthy release: a two-LP vinyl edition and a 24 bit / 96 kHz SACD. To achieve the best fidelity possible, engineer Paul Blakemore transferred the original three-track session tapes to high-resolution 96/24-bit digital files, which were then mixed by Jochem van der Saag. For mastering, Blakemore used an all-analog signal-processing chain in order to maintain the warmth of the original analog recordings. To master the vinyl LP edition, IMPEX engaged Bernie Grundman, who has mastered many of Barbra's albums over the last sixty years, to create the lacquer pressing master. Rich with the club's atmosphere, these historic, essential recordings present a warm, charming portrait of a truly important moment in New York City history and American pop culture.

Several years removed from Manhattan's flourishing jazz nightclub scene, tiny clubs such as the Bon Soir began popping up, and served as both a forum and launching pad for some of the finest vocalists and musicians the east coast had to offer. Because of Barbra's success there, Columbia Records A&R rep David Kapralik decided that the first album from his newly-signed artist would emanate from a setting in which she had become most comfortable: the small stage at the Bon Soir. Producer Mike Berniker and recording engineers Roy Halee and Adjutor "Pappy" Theroux set up the mics and recorders, and for three nights harnessed the electrifying show that Barbra had crafted. "The recordings we did at the Bon Soir were so authentically 'Barbra.' I produced her first three albums at Columbia, and while they were wonderful accomplishments, I thought that what she did each night at the Bon Soir transcended anything we ever did in the studio," says Berniker

Columbia ultimately decided to bring Barbra into the studio to record her first album, and except for the inclusion of several tracks on compilations through the years, the Bon Soir tapes laid dormant in the vault. Now, through this extraordinary release, everyone can at last enjoy the early sound and style of an icon in-the-making: the same brilliant artist whose performances at the Bon Soir were lauded by everyone from actress Helen Hayes to lyricists Alan and Marilyn Bergman. You're now invited for an evening at the fabled Bon Soir. Take a seat, order a drink and revel in the magic that is Barbra. You will not be disappointed!