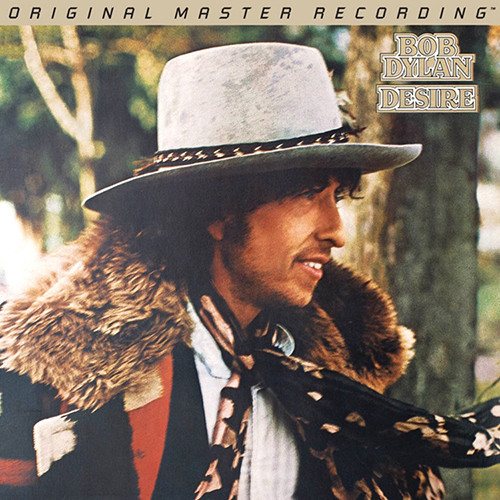 Bob Dylan cut Desire flanked by more than a dozen musicians, aided by a producer averse to multitracking, and bent on tequila. Reeling from the effects of his disintegrating marriage, the singer penned several of the most heartfelt songs of his career, including “Sara,” the most overtly public broadcasting of his private life and emotions committed to tape. Straddling lines between haphazard and organized, loose and planned, Desire lives up its title, a masterwork that Dylan would not equal in creativity, performance, and lyricism for another two decades.

Mastered from the original master tapes, Mobile Fidelity's hybrid SACD lays bare the catch-all ambience of the sessions as well as the unguarded emotionalism that fueled them. Largely captured at one unruly New York studio date, many songs are first-take arrangements, experienced on this reissue in a raw, realistic fashion that allows chords to swell, vocals to naturally carry, and percussion to span a seemingly bridge-wide soundstage. Accenting instruments—bouzouki, accordion, mandolin, violin, congas, piano—gain their own space and color the music with intriguing textures.

Surging with a nothing-to-lose disposition, Desire juggles myriad styles and owns up to no single theme. Disappointment and loss related to Dylan’s broken relationship surfaces directly and metaphorically, but the album isn’t mired in depression or sadness. More often than not, it howls, the sprawling canvas needlepointed with complexity and diversity. In pairing with lyricist Jacques Levy, Dylan invites narrative collaboration he never again repeated, as well as an eclecticism that gives the effort its fascinating charm.

Desire finds Dylan at an evocative peak. With the tour de force single “Hurricane,” he composes his first protest song in years, the enraged verses aimed squarely at maintaining the innocence of boxer Ruben Carter, falsely convicted of murder, as a violin melody swirls in the background. He finds similar inspiration in gangster Joey Gallo, turning “Joey” into a beautiful epic outfitted with Emmylou Harris’ transcendent backing vocals. Flashing a sense of humor, “Mozambique” relishes an irreverent quirkiness that balances the more serious fare.

And in the nakedly biographical “Sara,” Mediterranean-flavored “One More Cup of Coffee (Valley Below),” fragile “Oh, Sister,” and swirling fable “Isis,” Dylan develops a series of loosely related songs at once flawless, timeless, and tireless. Rarely has the folk-rock icon addressed love, romance, and loss more openly, eloquently, or universally. It’s no wonder they remain amongst the very favorites of many hardcore Dylan enthusiasts, and account for a large reason why Rolling Stone ranks Desire the 174th Greatest Album of All Time.